About our state economy 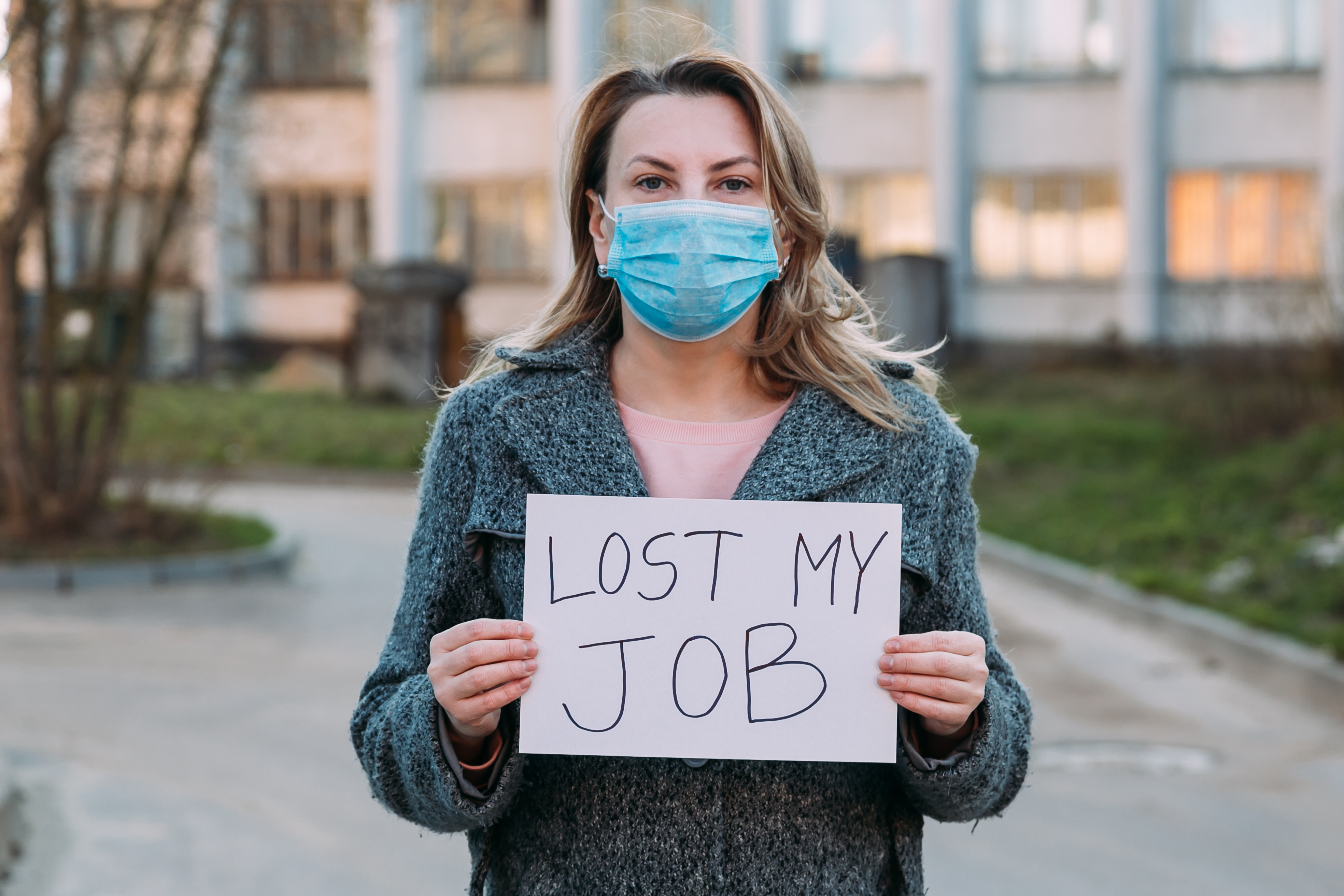 Many families and communities in North Carolina never healed from the Great Recession before COVID-19 created a new wave of financial harm. Generations of wage stagnation, structural barriers for people of color, and an economy rigged to concentrate wealth in the hands of a few left North Carolina exposed to a crisis like COVID-19. The pandemic exacerbated North Carolina’s pre-existing economic ailments, and it threatens to leave our state more divided, unequal, and vulnerable. 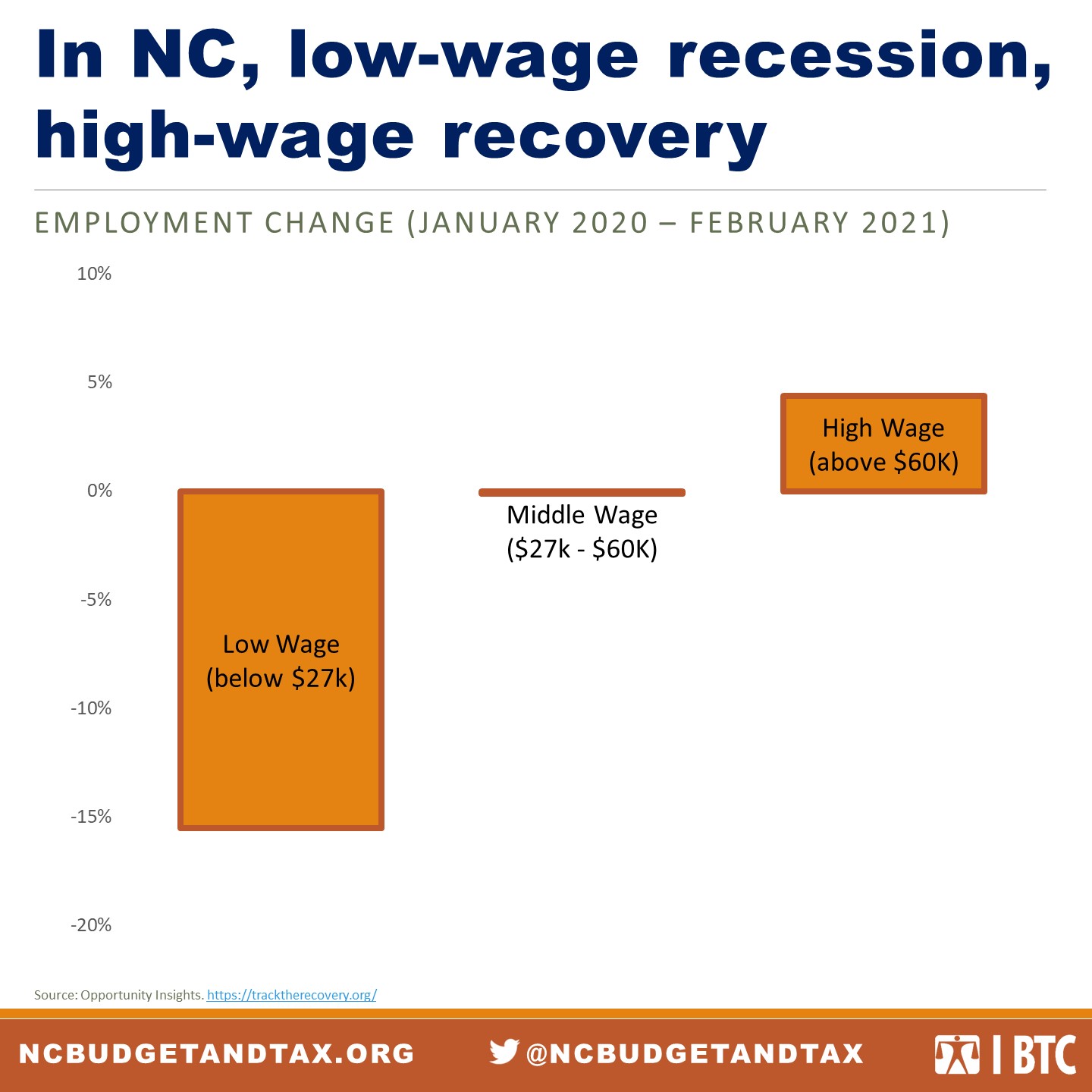 We’re seeing what economists call a k-shaped recovery, where middle- and upper-income jobs bounce back quickly while a deep recession continues for low-wage workers. Even more than in recent recessions, the economic harm is most concentrated on people with the least financial cushion to fall back on, while many well-paid people never experienced any loss of income. 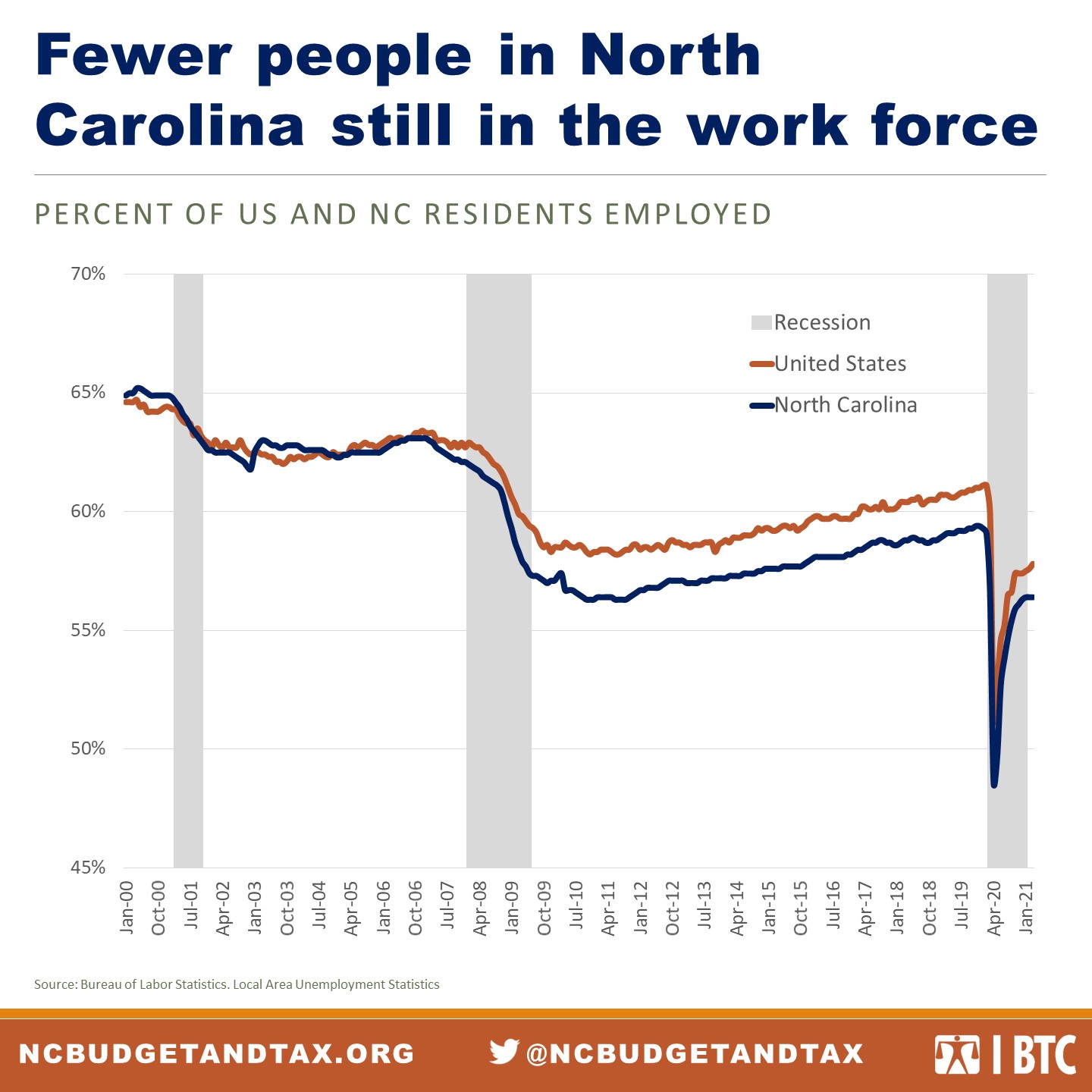 COVID-19 deepened a long-term trend of declining employment in North Carolina. While some of the jobs lost in the first few months have returned, a smaller share of North Carolinians were working a year into the pandemic.

Recessions often hit hardest on people of color. Lack of access to careers that are more insulated from economic cycles, barriers to stable employment, and a host of other long-standing economic inequalities conspire to make recessions deeper and longer-lasting for working people of color. The COVID-19 recession is somewhat unique because people of color perform so much of the essential frontline work with increased risk of exposure to COVID-19, but the economic collapse still created higher levels of unemployment than for white North Carolinians. 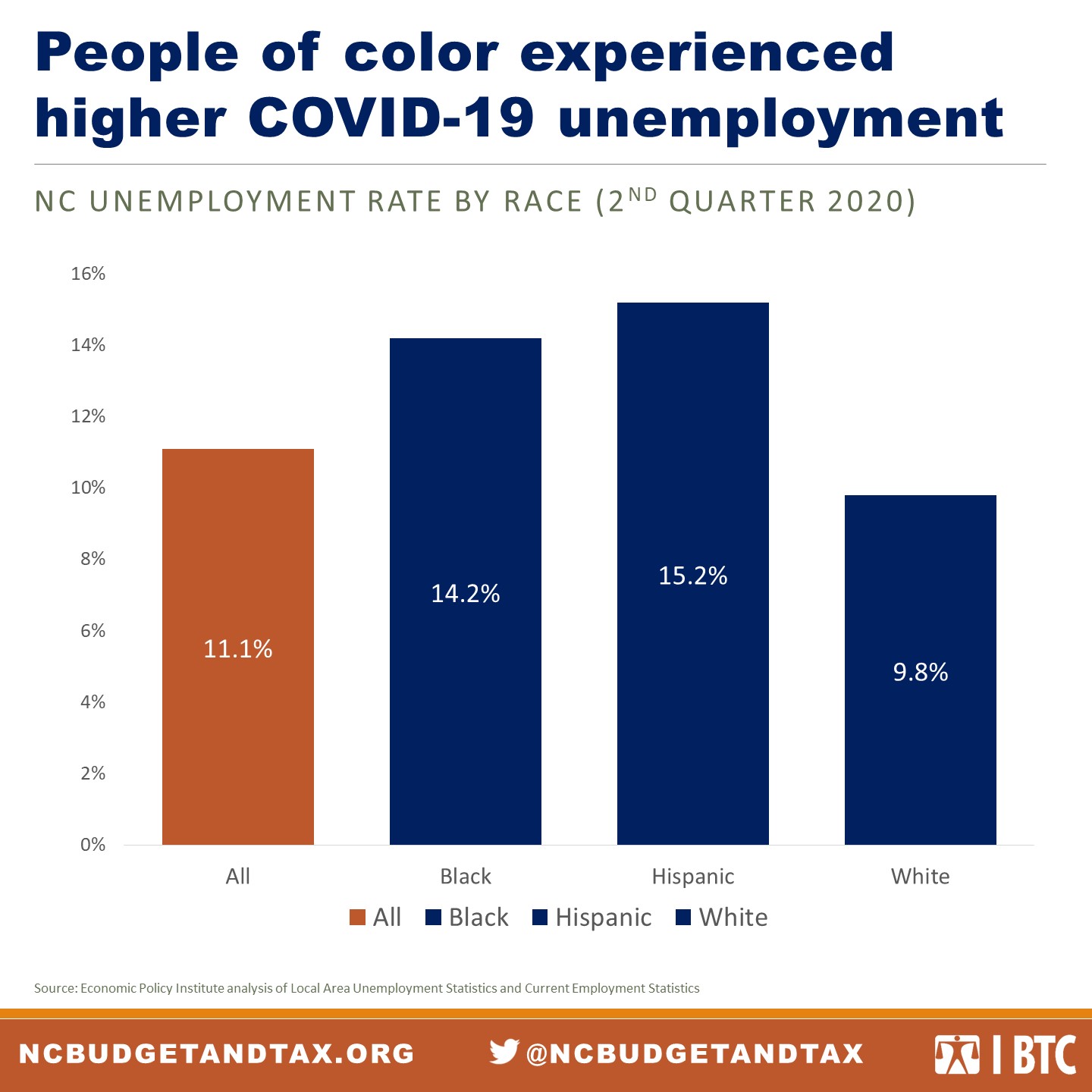 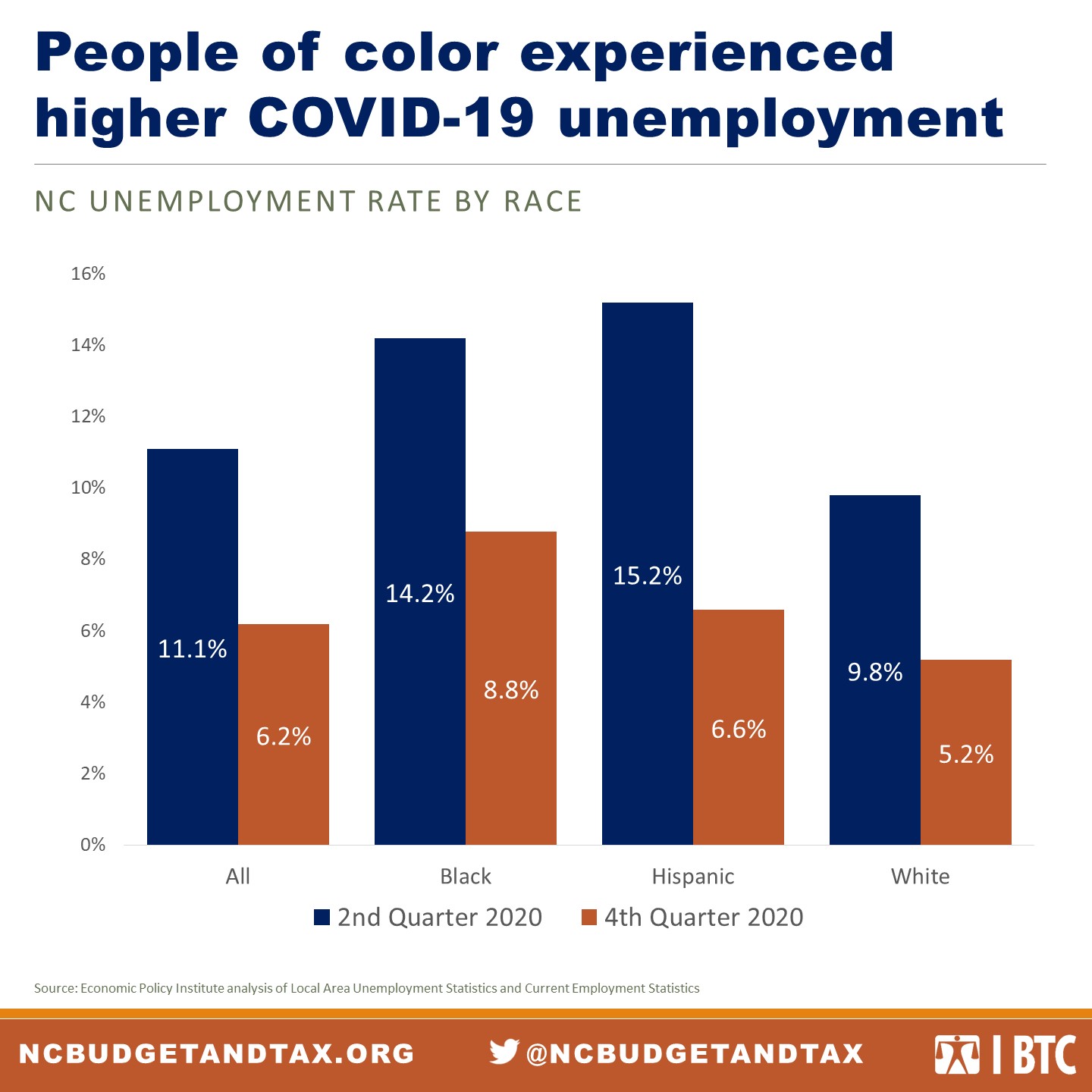 Generations of rigging the game 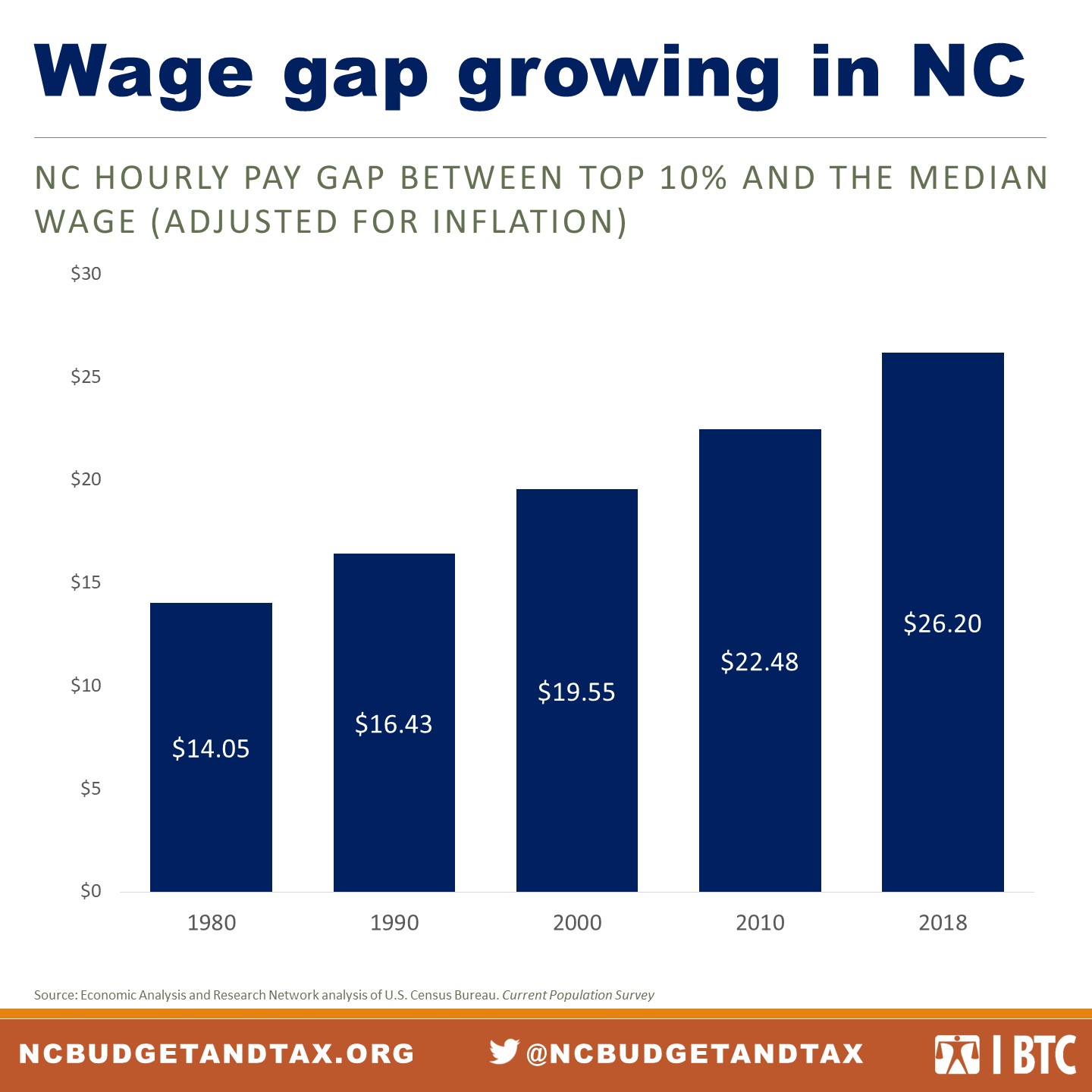 Wage gains going to the top

A widening divide separates North Carolina’s best paid workers and everyone else. Wages for the bottom half of the workforce in North Carolina have been stagnate or even declined (adjusting for inflation) in recent decades, while the best paid employees have seen their earnings increase dramatically. 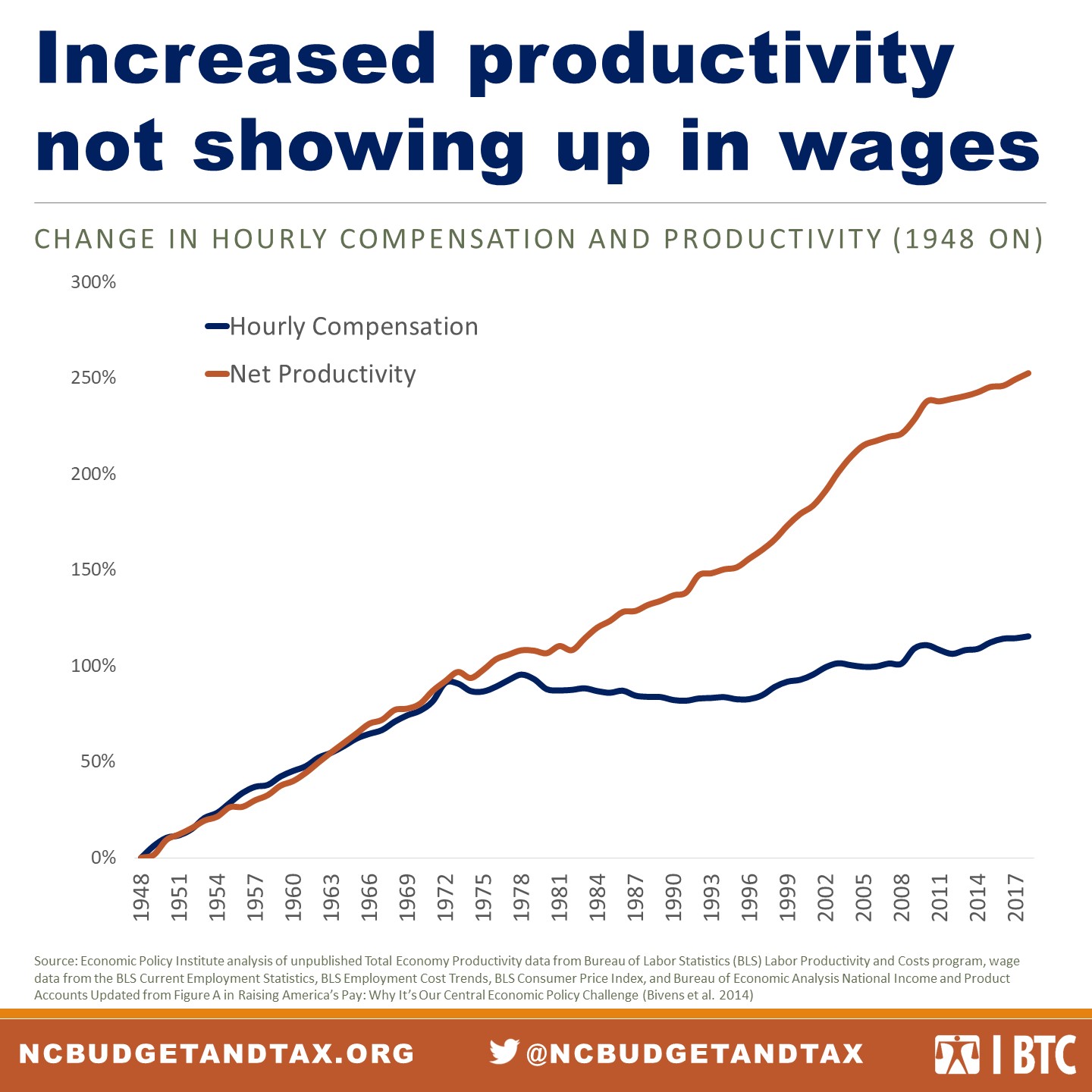 Working people are getting more productive, but not seeing it in their paychecks

One of the core mechanisms of a healthy economy has broken down over the past 40 years in the United States. Increasing productivity is supposed to create better lives because each working person is able to produce more and grow the economic pie. U.S. workers are getting more productive, but they aren’t seeing it where it counts — in their paychecks.

For the first few decades after WWII, innovation and education made U.S. workers more productive, and their wages grew right along, fueling the post-war economic expansion. A lot of workers, particularly white men in heavily unionized industries, were suddenly able to buy houses, go on vacations, and send their kids to college. Since the middle of the 1970s, it’s been a whole different story. American workers kept getting more productive, but the wealth they were creating increasingly ended up in rich peoples’ pockets and corporate balance sheets. By attacking workers’ power, empowering global corporations, holding down wages, and other tricks, special interests rigged the economic game to siphon off more of the wealth that our economy generates.