State-level decisions are often impacted by what is going on at the federal level.

The United States, like North Carolina, is in need of revenue reform that can improve the alignment of the tax system with the ability to pay and ensure that investments can be made to support the economic recovery and a strong economy moving forward.

The key to progressive federal revenue reform will be eliminating the Trump-era tax cuts and considering how to align our federal tax code to the principles of adequacy and equity.

The American Jobs Plan and American Families Plan recommend raising revenue by changing policies that affect profitable corporations and individuals with very high incomes, respectively. The dollars raised would provide the funding to invest in modern infrastructure and the human capital supports—through early childhood and other educational programming—that support a strong economy.

The personal income tax changes would impact just 0.8 percent of taxpayers in North Carolina, according to the Institute on Taxation and Economic Policy, and 55 of the country’s largest corporations paid no federal income taxes.

Improvements to the federal Child Tax Credit were passed in March 2021 as part of the American Rescue Plan. An estimated 137,000 North Carolina children will be lifted out of poverty by the Child Tax Credit expansion alone at a time when families across the state are in crucial need of help. The power of this provision lies not only in combatting poverty and hardship but also in its design to address historic exclusions and demonstrate how providing households monthly support will help them meet their families’ needs.

President Biden’s proposed American Families Plan includes a permanent fix to the Child Tax Credit that would extend the provisions through 2025 and make permanent full refundability of the credit for families. 2.5 million children in North Carolina would benefit from this change and children in families with the lowest incomes would see the greatest boost to the resources available to support their education and healthy development.

Find out more about the North Carolina benefits of the Child Tax Credit expansion from the Institute on Taxation and Economic Policy. 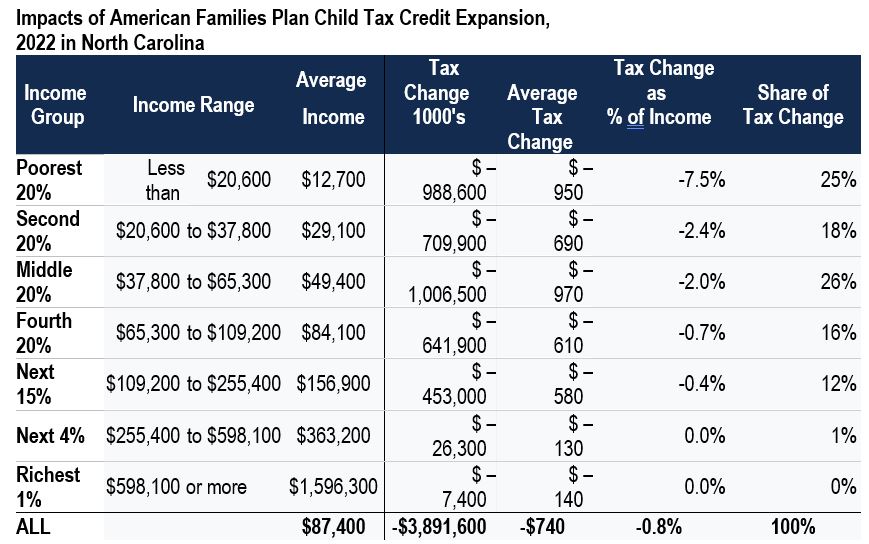