As North Carolina enters a period of economic recession brought on by the COVID-19 pandemic, it will be imperative for the state to make significant adjustments and improvements to its unemployment insurance (UI) system in order to meet the needs of the hundreds of thousands out of work across the state.

At present, North Carolina UI benefits are near the bottom of the 50 states, with an average weekly benefit of $277 (and a maximum of $350) and the maximum term of eligibility capped at a nationwide low of 12 weeks (most states provide up to 26 weeks of benefits). Most troubling is that under 9 percent of unemployed workers receive UI benefits in North Carolina, a by-product of the state’s limits on duration.

The recent congressional action in the CARES Act establishes the federal government to cover 100 percent of the cost of an array of extended and improved benefits. However, in order to maximize the impact of these changes, state lawmakers should take several additional actions.

Learn more about the challenges jobless workers face and our efforts to support them at our “I am a Tar Heel Worker” website. 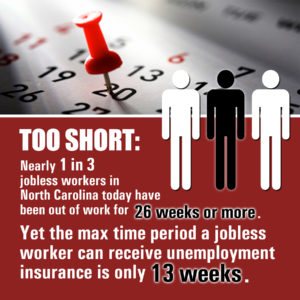 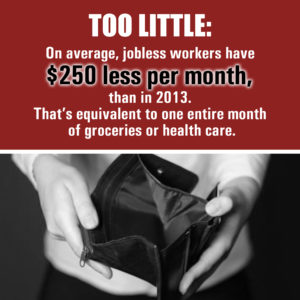 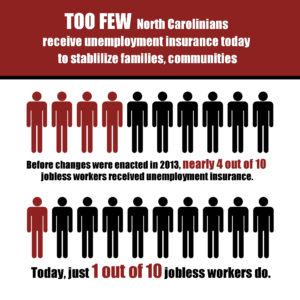 Cut Loose and Cut Off

The NC Justice Center’s Bill Rowe was featured in a WRAL documentary focused on North Carolina’s Unemployment Insurance, and how changes to the unemployment system left an estimated 170,000 long-term unemployed workers ineligible for federal unemployment benefits.