Contact Rebecca at rebecca@ncjustice.org or fill out this form.

I’m a Republican Fighting for Healthcare, Here’s Why | NYT Opinion

KEEPING OUR PROMISE TO MILITARY VETERANS & THEIR FAMILIES

VOICES OF THE UNINSURED 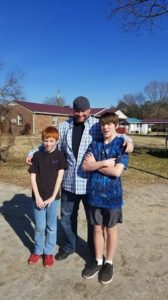 Ricky is the loving dad of five kids. He also has a rare genetic disorder that is difficult to treat and incredibly painful. When he and his wife divorced, he lost his Medicaid, and fell into the coverage gap. Just like that, his ability to access the medication he needed to manage his pain disappeared. Like so many others who become dependent on pain medication, Ricky turned to the illicit market and his life quickly spiralled out of control. Ricky recalls the dark place he had fallen into, “I just didn’t want to be in pain, and then I started to get depressed because I was in so much pain, and I didn’t have the insurance to go to see a doctor. Things just got worse and worse for me.” But Ricky would not allow addiction to pull him under. He had five very good reasons to fight, his kids were depending on him. Without health coverage, this process was much more difficult than it had to be, but Ricky prevailed and he is now in recovery. “ His condition and his pain have not gone away, and he has no way of treating either. “My health is so bad right now, I shouldn’t be working, but I don’t have the insurance or the time or means to sit here and heal. I have to work, which puts me in pain. So I’m constantly being tested.”

This situation has also led to Ricky being physically separated from his children, In fact they live hours away, in a county with a huge opioid problem and few employment opportunities, so Ricky doesn’t want to put his recovery at risk. Facetime is a poor substitute, but at least he gets to see his kids every day, even if it through a screen. His kids are able to see their dad too, and can’t help but notice the pain etched across his face, even if he tries to hide it from them. “I really love my kids a lot, they’re going through it. They’re getting depressed because of what they are seeing me go through. It’s not their fault and it’s really sad.”

Closing the coverage gap will help heal the thousands of families that have been harmed by the opioid epidemic. Ricky has also been impacted in other ways, “I have had so many loved ones die because of drugs. It is a bad epidemic. If you give people health insurance there are so many people you can save.” For Ricky, this would mean the ability to get the operation he needs, and a safe way to manage his pain so he can keep a steady job, save money and reunite with his kids, who really need their dad.

A Choice No Mother Should Have to Make 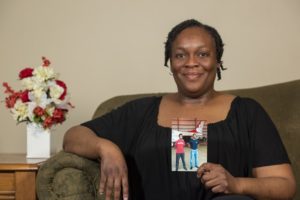 Emily moved her family from Chicago to North Carolina because she wanted to protect her son from the violence running rampant through their city. As they settled into their new home in Fayetteville, a new threat materialized, the Medicaid coverage gap. At first Emily, who suffers from some significant health problems herself, qualified for Medicaid, and so did her dependent son, Jamari, who is a Type 1 diabetic, which means he is dependent on insulin for survival. Things changed when she got a job. “I got a letter in the mail that said I was no longer eligible for Medicaid, because I made over $400 a month, but my son would still be covered because I was making less than $2400 a month, but the minute I made over that amount, he would no longer be qualified. Without Medicaid, I can’t afford all of the diabetic supplies and medications he needs to live.”

Emily ended up in the strange position of having to turn down a better job, even though she can barely make ends meet with her current one, because it would have put her over the amount that would kick her son off Medicaid. To further complicate matters, Jamari will soon age out of Medicaid and join his mom in the health coverage gap. Emily tearfully recounts a heartbreaking conversation she had to have with her son, “We’ve been talking about. We said what happens when you are no longer qualified with mommy? What are you going to do? He said, mommy, I don’t know.” Now in order to save her son’s life she may have to send him back to Chicago. “That’s sad that I have to send my baby all those miles away, to a place like Chicago so he can make it. I moved from Chicago because I didn’t want all the stuff that’s happening there to infiltrate him, and the reality is that’s where medically he’ll get help.” Illinois is one of the states that has expanded Medicaid, and Jamari would be able to get coverage on his own.

Emily really wants the legislators in the General Assembly to hear a plea “from a real parent’s heart. They need to know that their insensitive choices are putting lives at stake. I would look them dead in their eyes and say if it was your baby, what would you do?” 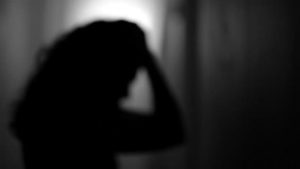 “Rochelle” is the mother of 5 children. After giving birth to her twins she was diagnosed with a severe form of bipolar disorder which made her unable to go back to work, where she had worked for 12 years. During the process of applying for Social Security disability, she qualified for Medicaid, which allowed her to routinely see a doctor to monitor her condition. She was also able to afford the medications she needs to control her illness.

That all changed when she qualified for disability. With her disability check, she is now earning too much to qualify for Medicaid, and Medicare doesn’t kick in for 24 months. As the primary caretaker of her children, she now faces a future where she must care for them without the medical attention she needs to treat her serious illness. If North Carolina closed the coverage gap she would once again be able to stay on top of her illness and be a better mom for her children.

Due to the stigma associated with mental health disorders, the storyteller has requested we use a pseudonym.

Lack of Support for Our Expectant Mothers

Anna and her husband were so excited to be having a baby, until she was denied Medicaid. To ensure that she would get the prenatal care she needed for her baby to be healthy she had to go into debt to afford the expensive insurance offered by her employer. “Due to me being offered work insurance, my husband does not qualify to receive any help through the marketplace,” Ann laments. “His work does not offer insurance. He is currently uninsured as we can’t afford $900 a month on top of bills.”

Even though the cost is more than what they can afford, Anna takes comfort in the fact that she is receiving the care her and her unborn baby need. But that is only temporary. As soon as her son is born she will be canceling her insurance. “I most certainly can’t afford my child and insurance. It would bring the insurance up to $1,000 a month. That’s over half of my paycheck that I bring home in a month. My entire family will be uninsured as we still won’t qualify for medicaid.” If we close the coverage gap, young families, like the one that Anna and her husband are starting, can focus on the joys and hardships of parenthood, rather than constantly worrying about how they would pay for a sudden illness or accident.

Anna wants our North Carolina lawmakers to “consider those above poverty level but who are also below middle class. I am stuck in this gap of making too much to qualify for medicaid but not making enough to afford insurance elsewhere. Either medicaid needs an expansion or we need to re-think our current health insurance options. How am I supposed to survive when we are expected to pay $1,000 a month on insurance,on top of rent, electricity, car payments and insurance, etc.”

Note: Anna wished to remain anonymous, so we have given her a pseudonym. She resides in Ashe County.