Lessons for Next Time: How North Carolina can prepare for an economic downturn.

The start of the Great Recession, and the collapse of financial markets in the fall of 2008, is more than a decade behind us, yet its impact still reverberates through North Carolina communities and households. Policymakers should use the lessons learned from the Great Recession to prepare now to protect North Carolina’s people and communities from the next economic downturn.

North Carolina experienced one of the sharpest drops in employment during the Great Recession of any state in the country. From December 2007 to the absolute lowest employment level in February 2010, North Carolina saw a decline of 325,000 jobs, or roughly 8 percent of total employment (See Figure 1).1 While North Carolina has since recovered to pre-Recession employment numbers of jobs, the state has never truly climbed out of the hold that the economic collapse left behind. 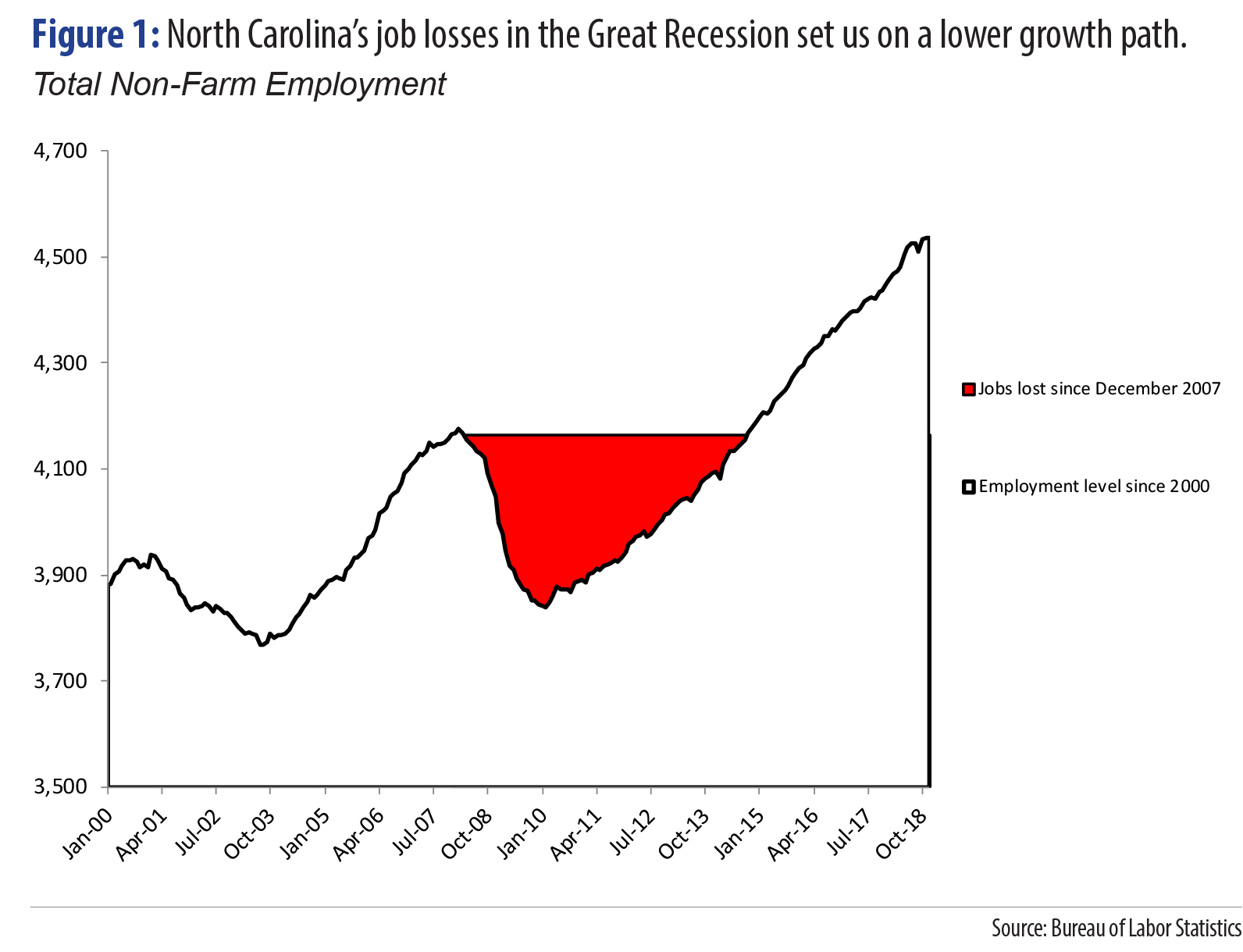 The recovery that officially began in July 2009 has been slow to produce the level of job growth necessary to keep labor force participation high, to generate broad-based wage gains, and to lift people out of poverty.2 The scars of the Great Recession are likely to be long-lasting and have clearly disrupted the well-being of many North Carolinians, with median household income still below pre-Recession levels, for example.3 To minimize the harms in the moment of a downturn and to reduce barriers to long-term growth prospects, public policy has a critical role to play.

It is unclear when the next economic downturn will begin, but the unprecedented length of the current expansion suggests that policymakers should prepare now for the ways in which economic shocks could disrupt the well-being of North Carolina families and the economy as a whole.

Lessons from the response to the Great Recession should inform state policymakers’ efforts. And specific systems —like the state’s unemployment insurance program, delivery of Food and Nutrition Services, budgeting practices and infrastructure investments — should be strengthened in North Carolina now. In so doing, policymakers can ensure that timely, effective policies can counterbalance the potential harmful effects of a downturn on every community’s ability to thrive.

Now that time has passed, there is a significant body of academic research documenting the specific and the broad policy responses to the Great Recession, primarily at the federal level (see Breakout Box on “Federal government must lead, but coordination with states is critical”).4

Using Moody’s macroeconomic model, economists Alan Blinder and Mark Zandi have summarized their findings regarding what could have happened in the U.S. economy without the policy responses of late 2008 and early 2009 as follows:

Researchers have noted that among the most effective policy decisions in the aftermath of the downturn were expansion of emergency unemployment benefits, additional food assistance payments, and federal aid to states that helped to balance budgets without deeper spending cuts.6

While the response worked well in the depths of the recession, the pulling back on this response too early contributed to a slower recovery.7 The result was that state budgets across the country, including in North Carolina, still weren’t able to balance due to depressed revenues when federal aid to states went away and deep cuts were needed. In addition, households lost critical supports that helped them make ends meet, stay connected to the labor market, and minimize the loss of income and assets.8

Federal government must lead, but coordination with states is critical

The federal government has two key policy levers when responding to an economic downturn: monetary policy through the Federal Reserve and fiscal policy that can be enacted through legislation by Congress and signed by the President.

The federal government, unlike states, can incur debt to pay for priorities and has historically done so during downturns as a way to stabilize the economy. These short- and even medium-term debts can be addressed through stronger economic growth coming out of a recovery if the interventions and investments are effectively targeted and sustained until economic stabilization occurs.

The federal response can have the greatest benefit if it does not supplant state effort but adds to it. For example, in the aftermath of the Great Recession, federal aid to states for education and Medicaid was provided but required a commitment to maintain eligibility and the state’s existing commitment to the programs. For example, in the allocation of funds to primary and secondary education, the State Fiscal Stabilization Fund, used existing state funding formulas as the primary distribution of funding across school districts and set in place requirements that state’s maintained their level of funding to public schools in FY2011 to at least the level in FY2009.9

When the federal government acts quickly and with the full power of the range of policy levers at their disposal, they can coordinate and connect to state systems, agencies, and policymaking to also support locally relevant interventions and effective implementation on the ground.

Future responses should be automatic and durable to achieve greatest benefits for North Carolinians.

A thorough review of the policy response has many lessons for policymakers at the federal and state level, including the early missed opportunities that failed to prevent economic shocks at the outset.10 Two broad lessons from the Great Recession that matter for state policymaking should be emphasized—the need for both quick response and commitment to maintain public investments and policy interventions until the economy is in full growth mode.

First, policymaking can take time that is precious in the context of an economic downturn, so establishing rules that create quick and, as possible, automatic stabilization is critical. For example, at the federal level, rather than require Congressional action to extend Emergency Unemployment Compensation programs, policy analysts have proposed setting up triggers for such programs based on indicators of economic hardship. Similarly, requiring states to pursue waivers on time limits in food assistance could be replaced with provisions that automatically waive time limits in states that reach certain unemployment rates.

Second, the failure to sustain investments to secure a more robust recovery after the Great Recession, as well as the lack of a more significant commitment to infrastructure investment, should provide today’s policymakers with lessons on the length and scope of public commitment needed. In North Carolina, the temporary tax package was repealed before employment and revenues had fully recovered to pre-Recession levels, ensuring that policymakers would cut programs like education and health care. Nationally, the reduction in additional food assistance support came before employment and household incomes had recovered.

North Carolina must establish more effective stabilizing policies ahead of the next downturn.

North Carolina policymakers can establish a stronger foundation for our economy to withstand the next economic downturn based on the lessons of the past Recession. Below are a few key state-level policy options that should be enabled and strengthened to ensure North Carolina communities have a solid foundation from which to respond to the next downturn.

Together, these policy changes would go a long way to ensuring North Carolina can respond to the needs that will arise with the next downturn. And, in the meantime, communities across the state will benefit from achieving a higher level of well-being with the support of these critical economic programs.

Download: Lessons for Next Time: How North Carolina can prepare for an economic downturn