The $5.4 billion that North Carolina received in flexible dollars from the federal American Rescue Plan  present tremendous opportunity to invest in transformational changes that can help all North Carolina communities respond to the ongoing threat of COVID-19 and lay a bold foundation for the future. Yet analysis of the NC House and Senate’s planned uses of these dollars reveal a haphazard slew of line items – over a hundred in each proposal – that altogether fail to provide a vision for change in our state.

The NC General Assembly is in ongoing talks on the state budget through the conference process, where appointed members of both the House and Senate meet privately to negotiate a single legislative budget that will then go to each chamber for final approval and be sent to the Governor. Our analysis to date has focused on the House and Senate proposals for the state’s General Fund dollars; however, the respective proposals on the state budget include suggested uses for much of the flexible dollars from the federal American Rescue Plan (via the State Fiscal Recovery Fund).

In addition to allocating much of the flexible dollars allocated to North Carolina from the American Rescue Plan, the House and Senate plans also allocate issue-specific federal grants to the appropriate state agencies. These dollars will go to support services including child care, mental health, and substance abuse, and will support areas like transportation, capital projects, small business credit initiatives, and more.

Here are our key takeaways, described further below: 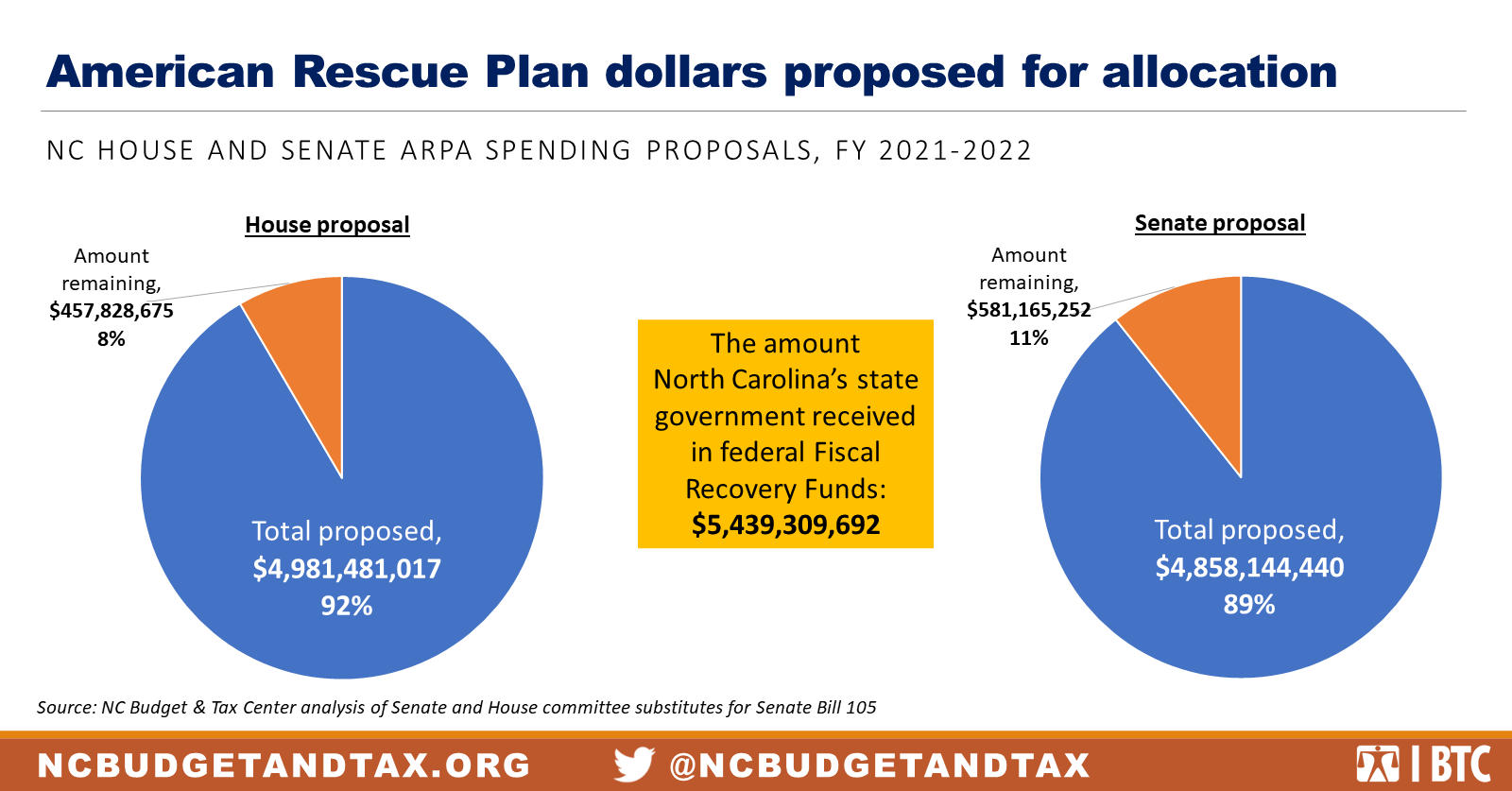 A lack of transparency in the process of developing these appropriations does harm to communities left out. State Fiscal Recovery Fund dollars allocated to state and local governments are able to be used to meet a broad range of needs to respond to COVID-19 and begin to build back stronger communities, and should seek and provide extensive opportunities for public input, as well as assess needs in communities to ensure they are targeted to those who need it most. Instead, the proposed plans allocate dollars to narrow uses without any indication of what needs exist.

In addition, despite there being differences between the House and Senate plans, the two are remarkably similar, suggesting that there were private negotiations between the chambers prior to the public release of the plans about what to fund and not fund with the State Fiscal Recovery Funds. The public was left out of this process. Unlike in other states where plans are underway to conduct statewide listening tours and pursue community input, North Carolina legislative leaders have not made clear that most of the investments that they lift up as important in their budget this year are one-time and funded by these federal funds. 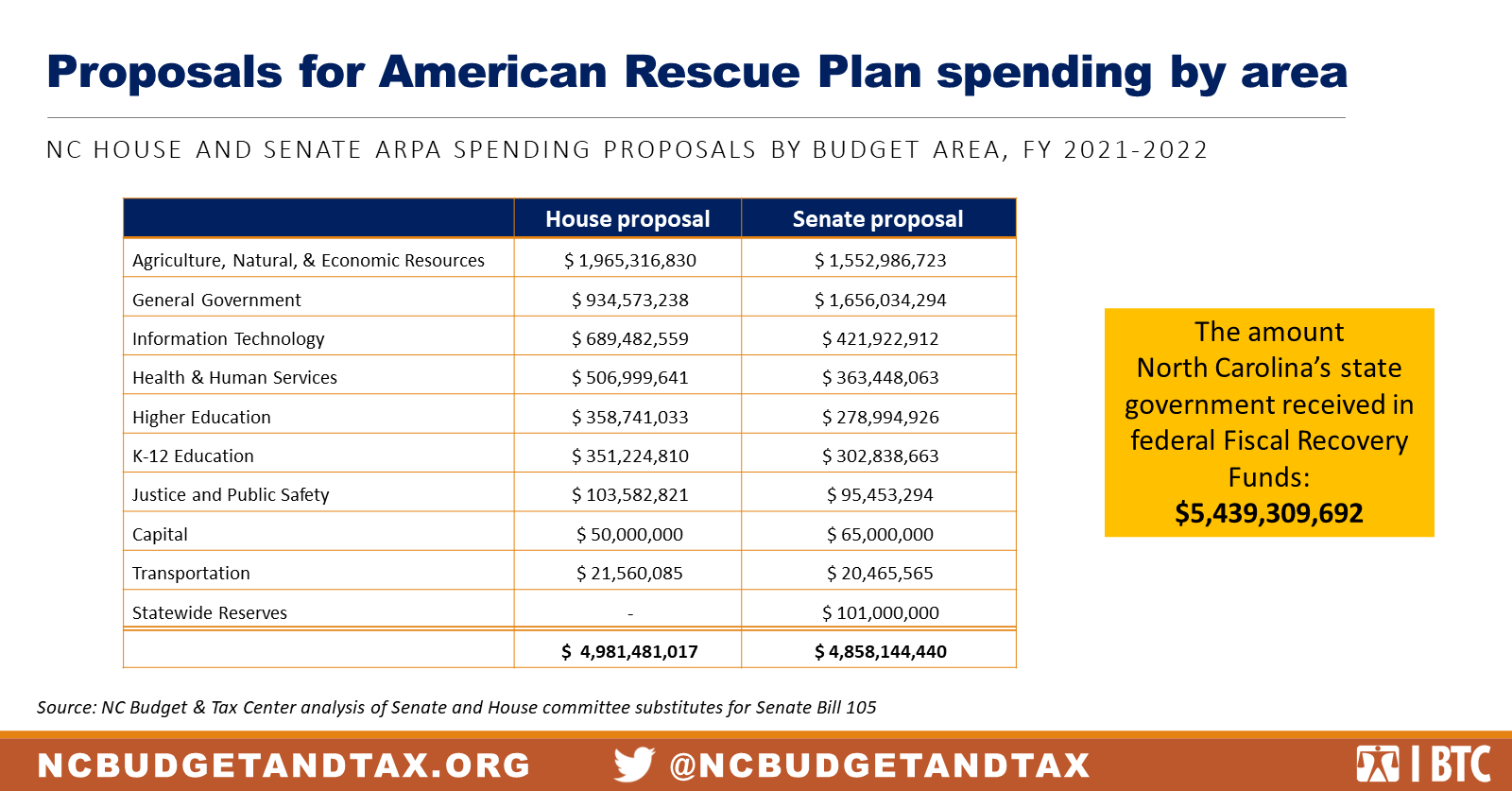 The plans almost exclusively make one-time allocations of the billions of federal dollars, without any indication in either the bill language or committee reports how far the funds will go, when the funds will be spent by, or as previously mentioned, how communities and needs were prioritized. Per federal guidelines, funds must be allocated by Dec. 31, 2024, and spent by Dec. 31, 2026. The House and Senate plans would each allocate about 90 percent of North Carolina’s share of the State Fiscal Recovery dollars (see graphic), providing very little reserve for unknown future needs and assessment of the impact of the initial appropriations.

For example, both proposals include one-time lump sum appropriations for water/wastewater infrastructure grants ($550 million in the Senate plan and $900 million in the House plan), yet they fail to outline a plan for how grants will be allocated to water and sewer utilities, and how the state’s allocations will interact with any local government allocations that have been made or will be made with localities’ own share of flexible federal dollars. 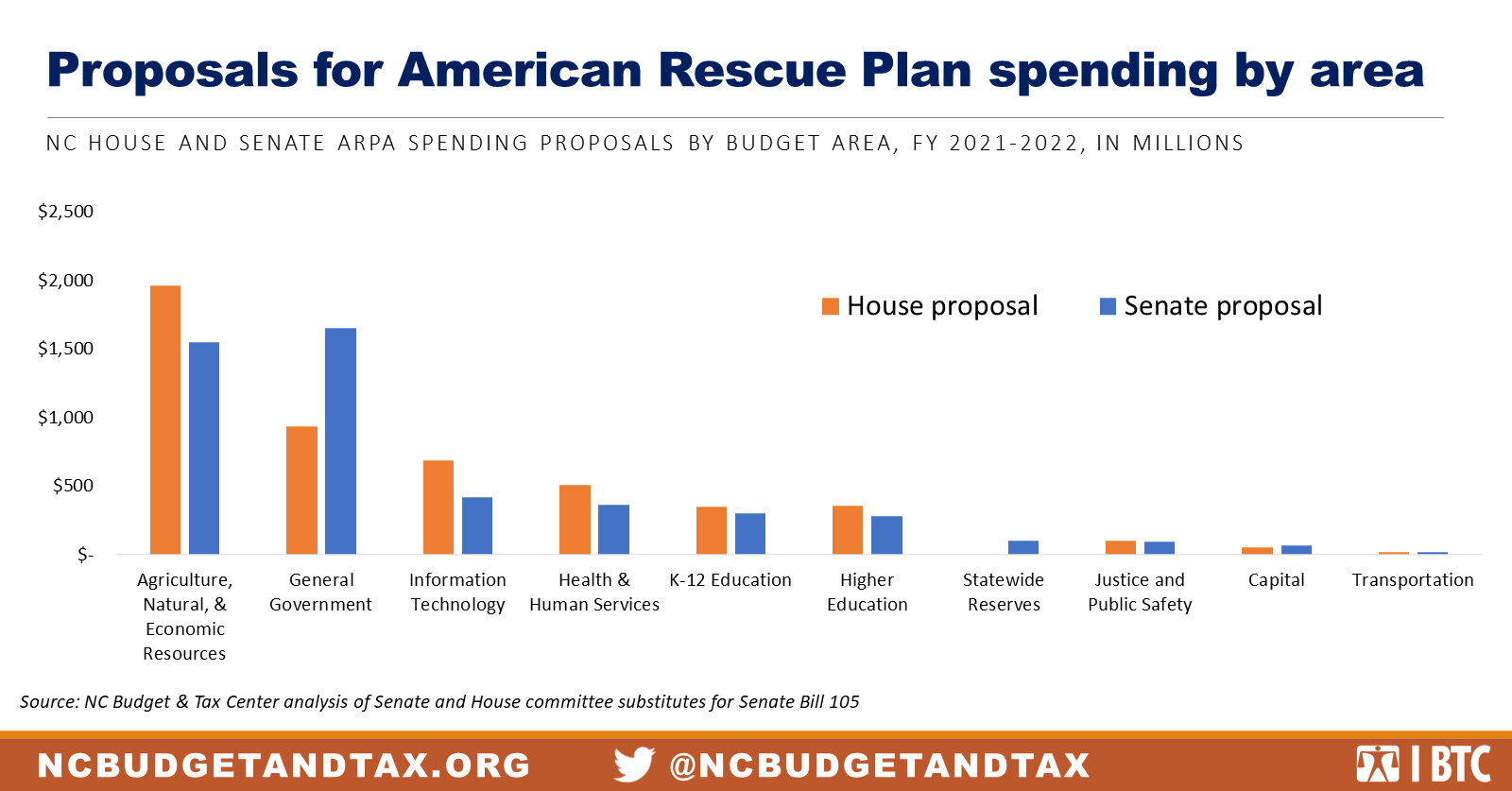 A better approach would be to systematically assess the needs across the state, create avenues for input from community members, and meet with a cross-section of local governments to understand where dollars are needed most and where local governments are looking to allocate dollars so that their efforts are complemented, not duplicated by the state.

The General Assembly is also proposing to use much of the State Fiscal Recovery Fund dollars to replace what should otherwise be investments of recurring state dollars. Funds for affordable housing development, rapid rehousing services for North Carolinians at risk of homelessness, crisis behavioral health services, and communicable disease surveillance and prevention services are among the areas funded with one-time federal dollars in the proposed budgets while few, or no, state dollars are obligated for these ongoing and critical needs in our state.

Along with proposing tax cuts that would put North Carolina’s state revenues below the level needed to keep up with the current, let alone growing, need for state investments, the budget proposals demonstrate legislative leaders’ use of federal dollars to prop up the state’s flawed financing model. This strategy is short-sighted and puts public services at risk for years to come.

To be sure, the plan includes investments that will change the landscape of opportunity in systemic ways, but will likely require ongoing investments. These include lead and asbestos remediation in schools and child-care facilities ($150 million in each plan), rapid rehousing for individuals and families at risk of homelessness due to the pandemic ($15 million in each plan), and funding for the Workforce Housing Loan Program to develop affordable housing ($200 million in the House plan and $40 million in the Senate plan).

Data continue to reveal the disparate impact of the pandemic on high- and low-wage workers, the greater likelihood that Black and Latinx adults experienced a loss of income, as well as women and immigrants. We must use this opportunity to provide greater supports to those in greater need and to advance a better, more inclusive vision for North Carolina.