Tax cuts for the exceptionally wealthy have produced unexceptional results

Official data show that North Carolina’s economic performance has been at or below that of many of our neighbor states in the Southeast over the past several years, directly undermining claims that cutting state tax rates would spur faster growth. Proponents of tax cuts for wealthy individuals and large corporations that started taking effect in January 2014 argued that these policy changes would propel North Carolina past our neighbors, but the evidence shows that this has failed to occur. North Carolina’s rate of employment growth has lagged behind several of our neighbors in the Southeast, and has been virtually indistinguishable from the average for the South Atlantic region. 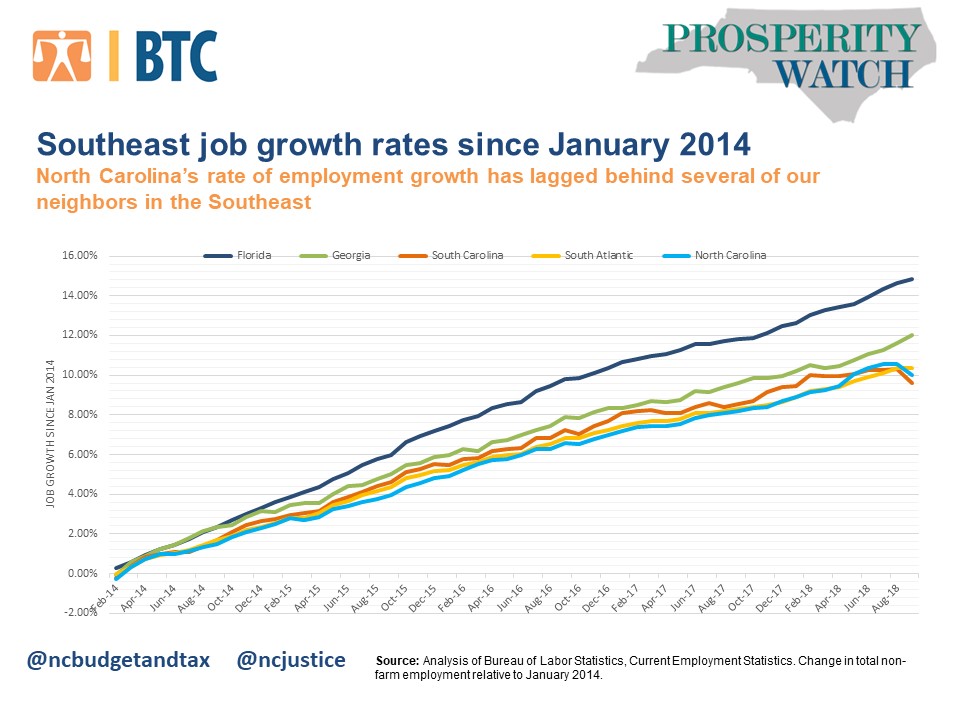 When tax cuts that were passed in 2013 began taking effect in the 2014 tax year, North Carolina had already been experiencing a slow recovery from the Great Recession for several years. That trend of growth has continued since, but once national and regional trends are taken into account, there is virtually no evidence that tax cuts improved North Carolina’s economic fortunes. From January of 2014, when North Carolina tax cuts started phasing in, to September of this year, employment in North Carolina has expanded by 10.03 percent, basically identical to the 10.36 percent rate of growth for the South Atlantic region more broadly. The Southeast has generally grown slightly faster than the 8.69 percent national average rate of job growth over that period, but that difference is clearly driven by regional trends such as faster than average population growth and industry shifts that are not specific to North Carolina.

While North Carolina has been consistent with the rate of job growth across much of the Southeast, its performance has lagged markedly behind several states in the region. Employment in Florida expanded by 14.85 percent since January of 2014, and Georgia also surpassed North Carolina’s record with employment growth of 12 percent. South Carolina’s 9.58 percent employment expansion trailed North Carolina, but only slightly.

The lack of exceptional job growth is particularly concerning given that North Carolina has not generated enough jobs since the Great Recession to keep up with its growing population. North Carolina’s population has expanded by 17.6 percent since the start of the recession, but employment has only increased by 8.2 percent, leaving a big gap between the need for employment and the number of jobs on offer. In fact, North Carolina would need 392,900 more jobs than exist today to return to pre-recession levels of employment.

All of these data indicate that tax cuts aimed at wealthy individuals and profitable corporations have failed to address North Carolina’s economic needs. Employment growth has remained at or below many of our regional peers, and the pace of job creation has not kept up with the demands of a growing population.