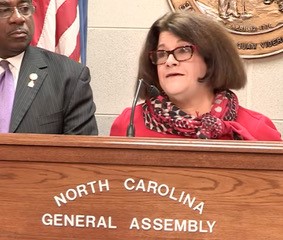 Jane Pinsky
Common Cause NC – Director of the NC Coalition for Lobbying & Government Reform
Known for her dedication to democracy, Jane Pinsky has spent her career working towards a more just society. She says it is part of her genetic heritage – her paternal grandfather, having been sent to Siberia by the Russian Tsar, escaped to the United States in the late 19th century, where he was a union organizer until he was blacklisted from Detroit to the East Coast. Her maternal grandmother was an early fighter for women’s rights. In 1948, her parents worked with Constance Baker Motley to integrate schools in Elkhart, Indiana and eight years later they helped the effort to integrate housing in Levittown, Pennsylvania.

As an undergraduate she campaigned to get gynecology services on the campus of her alma mater, Carleton College in Northfield Minnesota. She was also active in the anti-Vietnam War effort. The late Senator Paul Wellstone was one of the faculty leaders of the anti-war protests at Carleton while she was a student here.

Following college, she helped organize office workers in San Francisco and New York City, before moving to Washington, DC to open the first office for the National Women’s Employment Project, which represented office workers in five cities in their attempts to ensure that EEO laws were properly enforced. She was on of the founders of the National Committee on Pay Equity in 1979, and remained on that Board until she finally left DC in 1989.

Pinsky was Field Director and then Deputy Director of NARAL in the early 1980’s. Out of that experience, she helped start Emily’s List and later Lillian’s List in North Carolina. She also was Deputy Vice Chair and director of the Women’s Division of the Democratic National Committee, putting together a major event to raise money for the Eleanor Roosevelt Fund and open the 1984 Democratic National Convention with then Vice Presidential nominee, Congresswoman Geraldine Ferraro.

Following the DNC, Pinsky went to the American Nurses Association where she was Deputy Director of Government Affairs, and ran the Congressional Contacts program.

Through her leadership in organizations such as the National Women’s Employment Project, the American Nurses Association, NC Equity, NARAL, and the NC Child Advocacy Institute , she has improved civil rights, women’s rights, children’s health, and more: her achievements include leading the lobbying for the Family and Medical Leave Act, which was signed by President Bill Clinton in 1993. In NC she was a leader in assuring the passage of the Graduated Drivers’ Licensing Law, requiring seat belt use by all passengers in a car, car safety seats fro children, and bike helmets.

After moving to North Carolina, Pinsky helped found the NC Foundation for Nursing and served as it’s first director. She also helped create Carolina Jews for Justice to oppose policies limiting the right, particularly voting rights of marginalized people. serving as a member of its first Board of Director. Since 2007 she has been with Common Cause North Carolina, where initially she was Director of the NC Coalition for Lobbying and Government Reform. She has been called one of the unsung heroes of North Carolina’s suit against the state’s legislature that created maps based on race and partisanship. She has also worked with Common Cause North Carolina’s project with Historically Black Colleges and University on voter mobilization efforts.