As one of 14 states left with a coverage gap, North Carolina is home to far too many people earning too little to afford health insurance but unable to qualify for Medicaid.1 While Medicaid provides coverage for some people with disabilities in our state, many North Carolinians living with disabilities, chronic illnesses, and other complex medical conditions fall through the cracks of the current system. Closing the coverage gap would allow these uninsured North Carolinians to qualify for coverage based on their low incomes, enabling them to access regular care and treatment for their conditions without fear of bankruptcy or deteriorating health.

N.C. Medicaid currently leaves out many people with disabilities, chronic illnesses, and complex medical needs who have low incomes

The Americans with Disabilities Act (ADA) defines a disability broadly as “a physical or mental impairment that substantially limits one or more major life activities.”2 However, the Social Security Act (SSA) uses a narrower interpretation to define someone as having a disability based on “the inability to engage in any substantial gainful activity by reason of any medically determinable physical or mental impairment or combination of impairments that is expected to result in death or which has lasted or is expected to last for a continuous period of not less than 12 months.”3 This restrictive definition was originally developed to design eligibility not for medical coverage but for Supplemental Security Income, a program designed to provide “income support when an individual’s ability to work is significantly impaired, rather than when broad criteria concerning functional or health status are met.”4

LIFE IN THE COVERAGE GAP: Struggling to manage chronic conditions without health insurance

A long-time truck driver, Diane lost her job a er being diagnosed with diabetes. Uninsured and in the coverage gap, she could not afford the medications needed to manage her disease. As a result, she developed neuropathy and now lives with chronic pain that makes it difficult for her to find work.

“I’ve always worked, I want to work. I don’t feel like I can because I hurt so much all the time but it would make me so happy to get better and go back to work.”

Despite her conditions, Diane was denied Medicaid because she was not deemed disabled and she does not have dependent children. She has since had catastrophic health problems, including several strokes, heart attacks, and three open-heart surgeries that have left her saddled with medical debt.

“If I did get the help I needed, I would be able to get the medicine I need to keep my sugar under control, my cholesterol under control, help me with the pain I’m going through, and even be able to afford decent food because I can’t afford but one or the other.”

This narrow definition of disability, used by North Carolina Medicaid,5 therefore excludes many North Carolinians with ADA-defined disabilities, as well as people with a wide range of chronic and complex medical conditions. As a result, people with physical disabilities, mental illnesses, substance use disorders, cognitive disabilities, chronic illnesses, life-threatening diseases, and other complex diagnoses o en find themselves in the coverage gap. Defining an “able body” this way has let too many people fall through the cracks, leaving them vulnerable to compromise by their conditions and lack of access to care.

However, even those North Carolinians who do meet the strict SSA definitions of disabled or blind must clear other hurdles to qualify for Medicaid: they must have both below-poverty income earnings and minimal assets, as low as $2,000 for an individual.6 As such, even otherwise eligible North Carolinians with disabilities living in poverty with modest savings may not qualify for N.C. Medicaid.7

Closing North Carolina’s coverage gap would let all nonelderly adults with low incomes who have disabilities, complex medical needs, and chronic illnesses access affordable health coverage, which would allow them to receive regular care and treatment for their conditions while protecting against financial ruin. 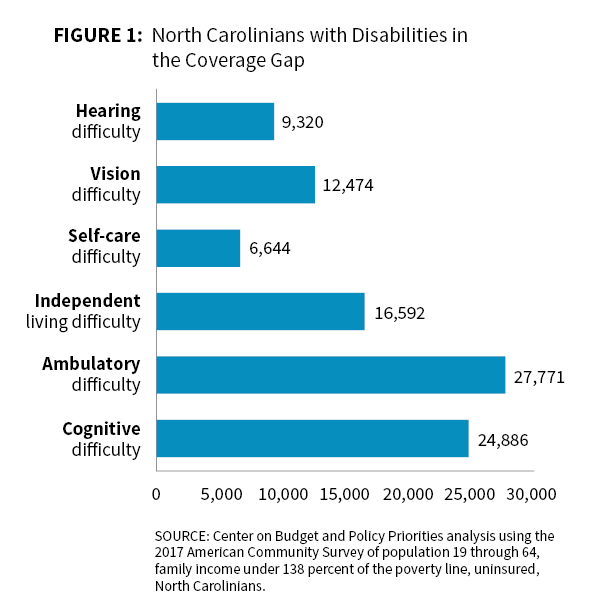 There are no waiting lists for Medicaid coverage for eligible enrollees. However, some have alleged that closing the coverage gap will somehow disadvantage people with disabilities, and others have implied that closing the gap would harm people on the waiting list for the Innovations Waiver, a program to provide home- and community- based services (HCBS) for people with intellectual and developmental disabilities (I/DD), most of whom currently have Medicaid coverage.

North Carolina can both close its coverage gap and add waiver slots to support more people with I/DD in need of HCBS. In fact, because the federal government provides a stable 90 percent financial match for closing the coverage gap, doing so will produce state budget savings14 — savings which lawmakers could use to fund new waiver slots for the Innovations Waiver, among other purposes.

Many other North Carolinians in the coverage gap have chronic conditions and complex medical needs. Roughly 150,000 uninsured North Carolinians who have substance use disorders and/or mental illness could gain coverage if the state closes the gap,15 which would allow them to afford care and treatment. Based on the experience of other states, closing North Carolina’s coverage gap could result in 2,197 fewer uninsured opioid-related hospitalizations each year.16

One estimate suggests closing the coverage gap would result in 641 new cancer diagnoses a year, including 291 new early-stage cancer diagnoses.17 Like with other illnesses, early cancer detection significantly improves success rates for treatment.

LIFE IN THE COVERAGE GAP: Delaying health care until it is too late

Margie’s brother-in-law Jeff was living in the coverage gap, unable to afford a private plan with his earnings as a part-time cook at a nursing home. He was hurting, but “he couldn’t afford to go to the doctor,” Margie recalls. “He finally had so much pain, he went to the ER and was diagnosed with Stage IV kidney cancer, and didn’t last long after that.”

Had he had coverage, Jeff could have been able to seek medical attention before his symptoms worsened and his disease reached an advanced stage.

Coverage gains among people with disabilities and chronic conditions

Specific results from states that closed their coverage gaps demonstrate that people with disabilities benefit from closing the gap. For example, among enrollees who gained coverage a er Michigan closed the gap, 23 and 20 percent had functional impairments related to a physical disability or a mental disability, respectively.19 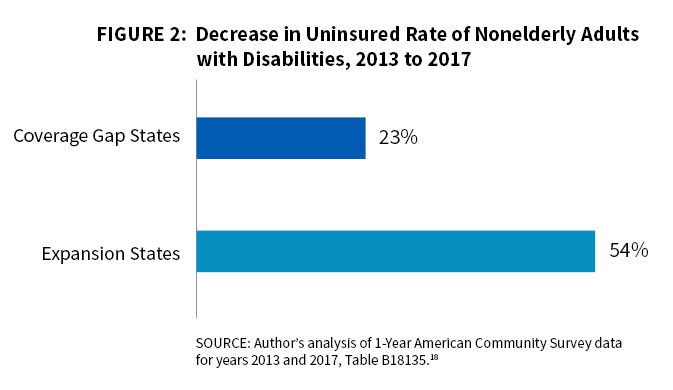 Increased access to and use of health care services

Closing the coverage gap has improved access to and utilization of health care services, particularly among people with chronic conditions. Studies have shown that closing the gap has been associated with lower uninsured rates among cancer patients;20 improved access to cancer surgery;21 reduced mortality among dialysis patients;22 increased diagnoses of diabetes and high cholesterol;23 increases in prescriptions for diabetes medications24 and cardiovascular drugs;25 increases in prescriptions for and Medicaid spending on medications to treat opioid use disorder and opioid overdose;26 higher use of chronic disease management;27 and substantially improved mental health among patients with chronic conditions,28 among others.29

Employment boosts for people with disabilities