A new report by N.C. State University economist Mike Walden provides more evidence that the middle class in North Carolina has been shrinking over the past 15 years, and it’s happening in almost every kind of community across the state. While middle-income jobs expanded by almost 6 percent nationwide between 2001 and 2015, North Carolina lost over 5 percent of its middle-paying jobs.

The hit to North Carolina’s middle class has derailed progress that the state was making in catching up to the national average for workers’ income. In what Walden calls a “U-turn”, the average working income in North Carolina has lost ground compared to the national average over the past several years, a reversal of progress that had been made over the previous several decades. 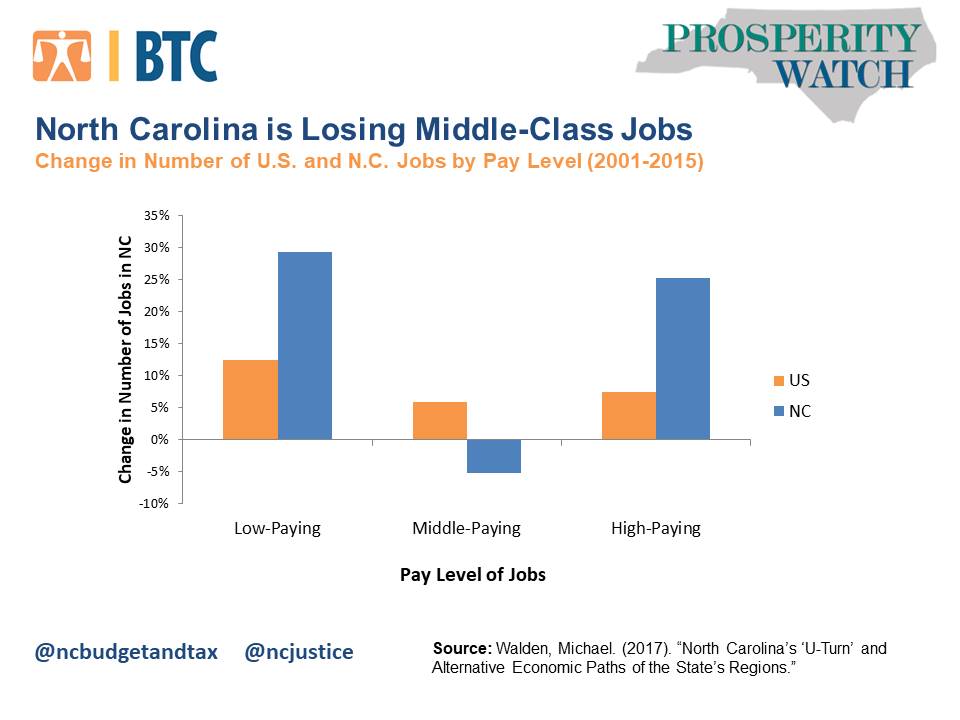 This decline in the middle-class is surprisingly widespread across different types of communities in North Carolina. Low-paying jobs have grown in number faster than middle-paying positions in almost every city and town in the state, almost irrespective of how fast a community’s overall economy is growing. In many of North Carolina’s most economically challenged communities, which have seen a net loss of jobs, the losses have been the most dramatic in the middle of the income scale. Some communities have seen enough growth in low-paying jobs to avert an overall decline in employment, but have lost substantial numbers of middle-paying jobs at the same time. .  Finally, many urban areas have seen rapid job growth at the top and the bottom of the income scale, but have still been slow to add middle-income positions.

All of this means that middle-income positions make up a shrinking share of job opportunities in North Carolina, as well as the potential reversal of generations of economic progress.