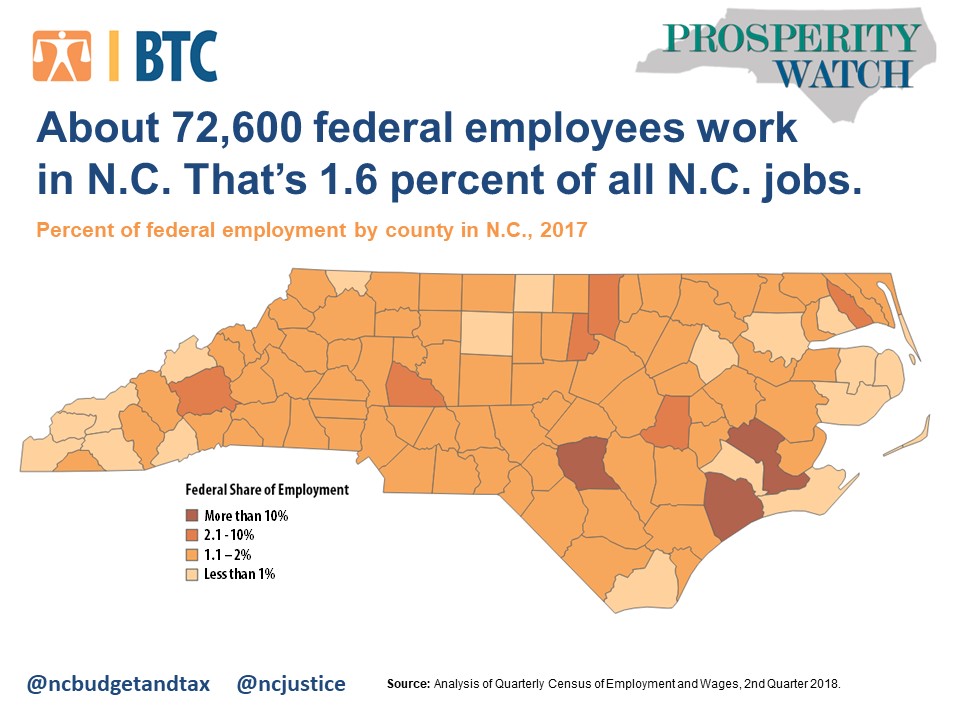 Even without including members of the armed services, federal contractors, and state government employees whose salaries are paid with Federal funds, North Carolina is home to roughly 72,600 federal employees, or 1.6 percent of all jobs in the state last year. Moreover, many federal positions are good jobs that pay a living wage and have opportunities for career advancement. The average weekly salary for civilian Federal employees in North Carolina is just shy of $1,400, which translates into an annual salary of approximately $71,750.

These jobs not only benefit federal employees and their families, but support consumer spending that is the foundation of local economies. Based on the most recent data available, federal employees brought over $5.2 billion in wages into the state of North Carolina during 2018, which accounts for 2.4 percent of all wages paid in the state. Because most of this income is spent in the communities where federal employees live, federal wages support additional jobs in construction, retail, healthcare, entertainment, and a wide range of other professions that rely on consumer demand.

Every county in North Carolina is home to at least a few dozen federal employees, but the presence of federal jobs and paychecks are particularly vital to certain communities across the state. As can be seen in the map above, some of the communities that benefit the most from federal civilian employment are in economically distressed parts of North Carolina where it is hard to find good jobs that can support a family.

In Craven County, home to the Marine Corps Air Station at Cherry point, the Federal government provides roughly 1 out of every 7 jobs and one-quarter of the wages (again, that does not include military personnel). Fort Bragg and Pope Airfield in Cumberland County and Camp Lejeune in Onslow County also come with a significant number of other federal jobs, accounting for over 12 percent of the civilian workforce in both communities. Several other counties across North Carolina benefit enormously from the presence of federal workers, even if not quite to the extent of communities surrounding major military installations.

Even without considering the range of essential services that federal employees perform, federal jobs and income are an essential component of North Carolina’s economic foundation.