Half a decade later, cuts to unemployment benefits are making a mark on NC economy

Six years after the North Carolina General Assembly implemented a series of extensive changes to North Carolina’s unemployment insurance system, the program is among the least effective in the country. The justification for these changes was the high level of debt with the federal government that the state had incurred to pay out benefits during the Great Recession, a level of debt that had been brought on by years of tax cuts for employers during good times.

The state is similarly situated in an economic expansion and cutting taxes for employers given the solvency of the state’s Trust Fund under the diminished program. At the same time, there is increasing focus nationwide on state level preparations for the next downturn with research documenting the role of unemployment insurance can play when effectively reaching those who have lost their job through no fault of their own throughout all phases of the business cycle. 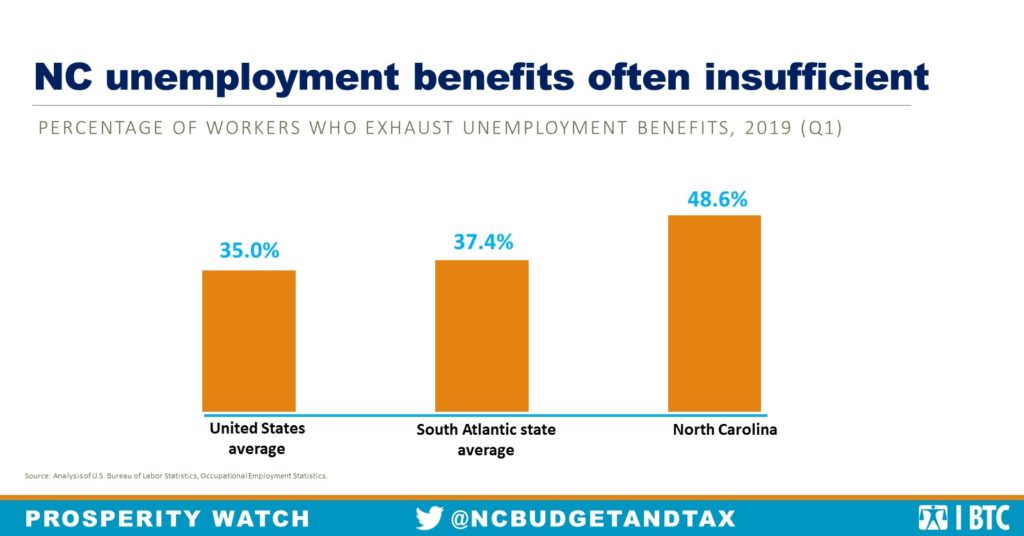 The effectiveness of a state’s unemployment insurance system at stabilizing a household after job loss and communities through periods of high, sustained unemployment depends on several factors, ranging from the amount of benefits that workers receive each week to the maximum number of weeks that they can receive benefits after becoming unemployed.

Rather than pushing workers to find jobs more quickly, various researchers have found that changes in North Carolina—as well as similar changes in other states that have experimented with these kinds of provisions—have pushed jobless workers out of the unemployment system without moving workers to employment or keeping workers connected to the labor market.

Recent research more broadly finds that during the two most recent recessions, the poverty rate among jobless workers increased by nearly 13 percentage points following unemployment benefit exhaustion. Workers coping with the challenges of poverty have less cash to put into the economy, depressing economic growth for everyone.

Unemployment insurance systems that prioritize the economic security of jobless workers support the economic well-being of workers and boost the health of the economy as a whole. The Congressional Budget Office has ranked unemployment insurance first among 11 policies for stabilizing the economy and supporting long-term job creation. As the state considers its preparedness for the next recession, the failure of the system to work in good times means its countercyclical power in bad times will be even further diminished.