Fifty years ago, baby boomers entered the workforce, and over the next two decades, they steadily grew as a share of the labor force in the United States. As the baby boom generation reaches retirement age and birth rates in the United States slow, there are growing gaps in the number of workers needed to keep the economy productive and growing.

People coming to the United States to work, and their children, are playing an important role in contributing to the growth of the working-age population and providing labor to growing industries and communities otherwise experiencing population decline. Their contribution has been found by economists to be critical to the long-term growth trajectory of the U.S. economy. [1]

North Carolina has not been immune to the challenge of needing to increase the labor force to address the aging of the population.[2]  This has been a particularly acute issue in rural counties across the state. With declining populations and industries, many rural communities have been boosted by the arrival of immigrants.[3] In similar fashion, immigrants have also strengthened the infrastructure of the main streets across the state by launching businesses that also translate to work creation and productivity growth.[4]

Understanding the role of immigrants as economic and social contributors, as well as key members of the state’s workforce, is critical to informed and effective policy making. While much of current policy-making seeks to exclude immigrants from opportunity in various ways, there is emerging work happening at the local and state level across the country to strengthen the connections for immigrant workers to the labor force and ensure that everyone in our communities can thrive.

Across all industries in North Carolina, there are 550,000 immigrants in the workforce.  This represents 11 percent of the state labor force.  The foreign-born population participates in the labor force at slightly higher rates than their native-born counterparts, with a 70 percent participation rate. In contrast, the participation rate sits at 60 percent among those born in the U.S.[5]

Among immigrants in the state, 64.7 percent are in their prime working years (25 to 54 years of age) whereas the native-born population is just 37.7 percent prime working age.[6]

Of particular note is the role that immigrant labor has played in the agricultural industry with immigrants making up 51 percent of the agricultural workforce.[8] These estimates are considered low, and state data on immigrant farmworkers is limited. The presence of immigrants has had positive effects on agriculture as it gives the state a comparative advantage in the production of goods and services and the creation of new global markets in the agricultural sector. With the agricultural industry contributing $87 billion to the state’s GDP, it is critical to ensure steady labor availability for farmers to succeed.[9]  As can be seen in Figure 1, both construction and technology have workforces where more than 1 out of every 7 workers was born outside the United States. 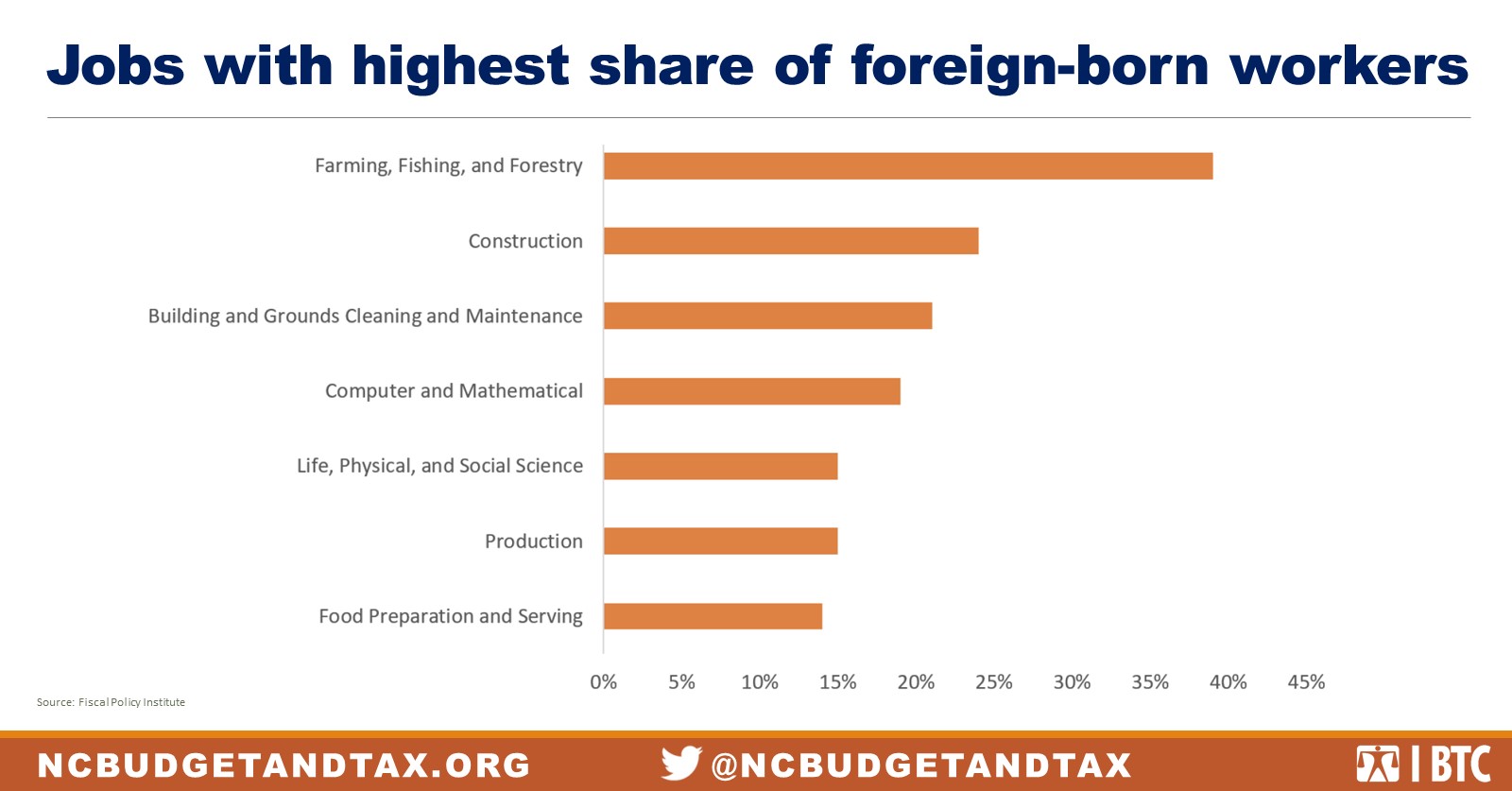 Common destinations for immigrants are metropolitan areas, including Mecklenburg County and Wake County, but immigrants have been gradually moving into rural counties as well.  The mobility of immigrants toward rural communities has revitalized local economies by increasing the income in communities, generating demand for goods and services and supporting more active civic life and entrepreneurial development.

In rural communities, immigration contributes to population growth, which, in turn, can stabilize communities and create new opportunities. Communities that experience a decline in population often experience difficulties in maintaining the levels of essential services that they need. Declining population can also mean communities are losing their local tax base, which subsequently leads to budget cuts affecting a community’s infrastructure and ability to deliver services.[11] Population growth with immigrant integration has been a strong contributor to communities seeking to maintain their  quality of life for immigrants and native-born residents alike.[12]

In addition to the labor force contributions of immigrants, there is also a business and job creation impact resulting when communities welcome and integrate immigrants. Immigrants are twice as likely to start their own businesses as native-born people,[13] and that entrepreneurial activity generates around $1 billion in business revenue, which adds to the state’s GDP and creates jobs statewide.[14] In North Carolina, 120,000 people are employed by firms with at least one immigrant entrepreneur.[15] A dynamic effect of immigration is that it also injects innovation and competition into different markets.

Welcoming cities capitalize on the presence of the immigrant entrepreneurial spirit by implementing robust and intentional integration plans and removing barriers. An environment that fosters business growth includes immigrant-friendly legislation, the promotion of entrepreneurship community programs, and sets up financial opportunities.

While a federal immigration system that recognizes how and why people come to this country and supports their connection to economic opportunity is needed, there are state level policies that North Carolina can embrace to advance the goal of immigrant integration and capitalize on the existing human capital and labor force contributions that immigrants bring to North Carolina that benefit us all.

The first steps in strengthening the immigrant workforce should be to advance a policy of tuition equity. Such a policy would provide young graduates — an estimated 3,000 each year in North Carolina — with an affordable pathway to educational attainment. This would additionally support the state’s goal of increasing educational attainment by 2024.

Beyond tuition equity for those leaving high school, the state can also identify ways to make skills training and accessing credentials affordable and accessible to the immigrant workforce so that they can advance in careers and contribute to industry growth and innovation.  This set of policies could focus on making job training affordable, removing barriers to job training such as child care and transportation costs, and actively engaging the immigrant workforce in career pathways.

These state-level policies, such as increasing access to skills training, can also support expanded opportunities for all residents in North Carolina communities.

The immigrant community is already an economic powerhouse, that plays an integral role in North Carolina’s economy. When given the tools and resources, immigrants can thrive and succeed while helping the local and state economy thrive as well. Migration and immigrant integration is not only good for immigrants and their families, but also for the communities welcoming them.

[1] National Academies Study, 2017.  The Economic and Fiscal Consequences of Immigration. Accessed at: https://www.nap.edu/catalog/23550/the-economic-and-fiscal-consequences-of-immigration

[4] Budget and Tax Center, “Smart Choices in an Era of Migration”