Income and geography are creating digital divides in North Carolina

Reliable high-speed internet access is fast becoming as vital to economic opportunity as electricity, good roads, and adequate water. While much discussion rightly focuses on addressing the lack of broadband access in rural communities, income disparities are an even more potent force creating digital divides in North Carolina. 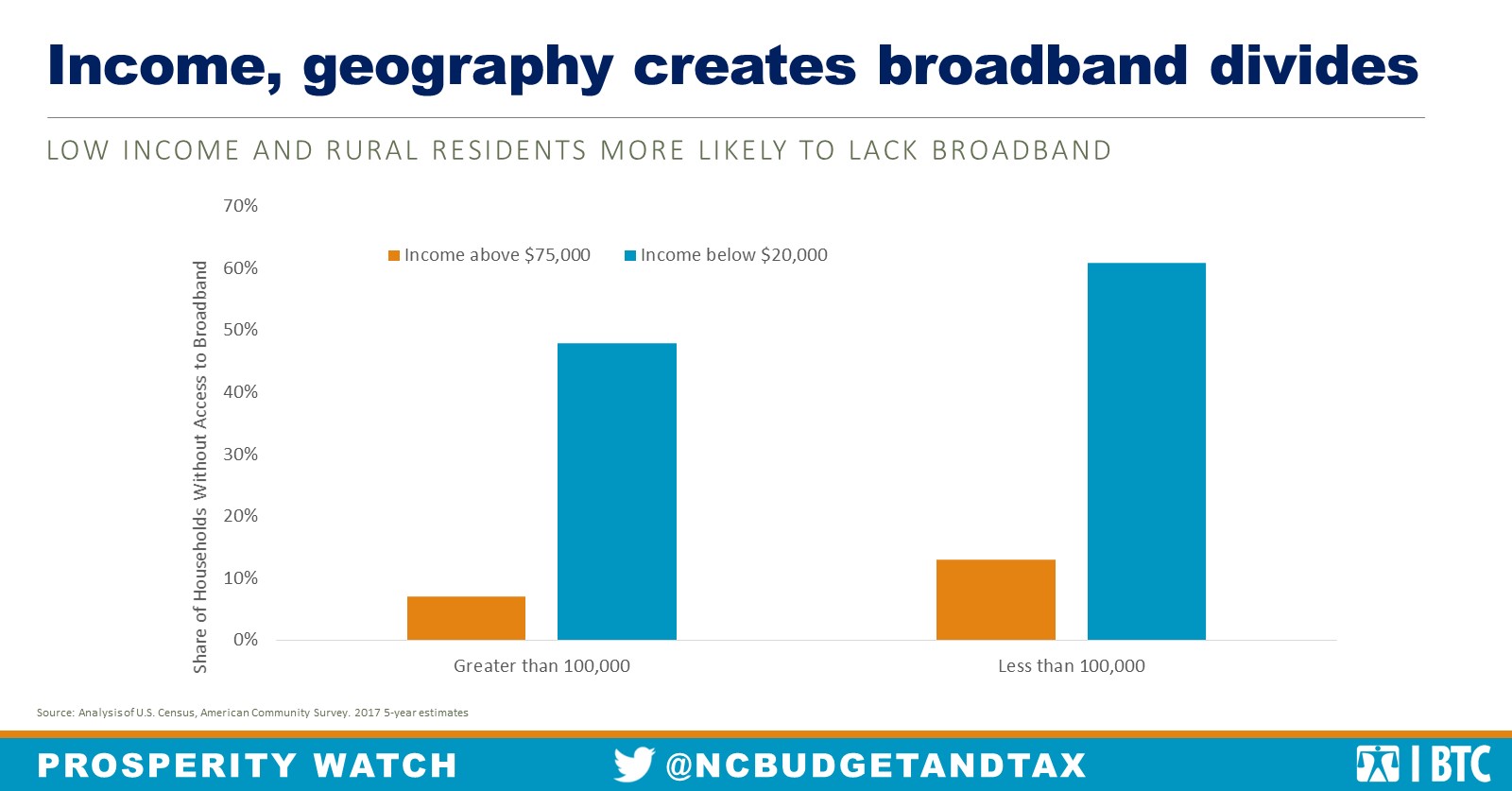 Broadband access is certainly more of a problem outside of North Carolina’s major urban areas, but income still plays a central role in shaping digital divides in more rural communities. Even in more rural counties with fewer than 100,000 residents, only 13 percent of households with incomes above $75,000 lack broadband access, compared to 60 percent of households in these counties that earn less than $20,000. Broadband is certainly more accessible in the few North Carolina counties with more than 1 million residents, where the majority of households under $20,000 and virtually every household over $75,000 has broadband access. Still, even in North Carolina’s most densely populated counties, the digital divide along income lines remains stark. All told, rural residents across the income spectrum are more likely to lack broadband, while more affluent rural households are served at a rate closer to their peers in more urban areas than their less wealthy rural neighbors.

A few important caveats should be made here. First, these data are taken from the American Community Survey, so are based on peoples’ self-reported assessment of whether they have broadband access. The rural-urban digital divide is likely more distinct than these data fully reflect because they do not distinguish between different types of broadband that offer very different levels of actual speed. For example, these data do not fully capture the distinction between gigabit fiber access and other forms of broadband that offer nowhere near that level of service. Second, this analysis does not differentiate between people who genuinely live out in the country and people who live in towns situated in less-populated counties. Affluent residents of sparsely populated counties are more likely to live in towns where there is enough population density to attract broadband service, so geography still plays an important role.

Nevertheless, these data show that the private market is more likely to leave low-income urban residents without broadband than more affluent residents of smaller communities. This is part of what makes broadband divides a classic market failure that demands public investment. Ensuring everyone has broadband access makes the entire economy function more effectively, but there are areas where the private market does not see enough return on investment to serve. Just like water and roads, these are cases where treating broadband as a public good creates more economic opportunity for everyone, not just the people who are not being served by the private market.

The digital divide can become a self-reinforcing feedback loop creating intergenerational cycles of poverty. Without strong connectivity, students often struggle to complete their homework, a parent looking for work can’t search digital job boards, and senior citizens can’t use the internet to check in with their doctors. These compounding barriers make it hard for low-income North Carolinians to afford broadband service and often prevent people of modest means from moving to areas where broadband is available in the first place.