On January 1st, North Carolina’s tax rates on individual income and corporate profits were lowered once again. These reductions were scheduled to go into effect with the passage of the 2017 budget, butthe full cost was never accounted for because the current budget only runs through the middle of this year. As a result, legislators face a structural deficit this year that could compel them to make even deeper cuts in vital public services. .
North Carolina will have roughly $900 million less in revenue over a full fiscal year from the reduction of the corporate income tax rate to 2.5 percent from 3 percent and from the flat personal income tax rate falling to 5.25 from 5.499 percent.
These additional tax cuts, added to annual revenue losses since 2013, means roughly $3.5 billion less in revenue each year to fund community and voter priorities like protecting children from abuse, building healthy schools, serving seniors meals, protecting our water and air, and training the future workforce.
Years of tax cuts have produced a structural deficit, where North Carolina is not projected to collect enough in revenue to pay for existing levels of service. The North Carolina General Assembly Fiscal Research Division projects that the state’s tax code will not generate sufficient revenue to meet the current obligations of service delivery and infrastructure investment in communities across the state given the growing population after this fiscal year. Each year the state has to consider what it will take to fund current services for a growing state as well as the changing nature of costs for delivering programs. While no longer required to fully fund enrollment growth due to changes made by legislative leaders in their budgeting, the failure to deliver the same services to the people who need them reduces the benefits of public investments to the broader public and communities. 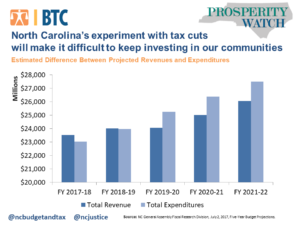 For example, from last fiscal year to this one, state policymakers increased state spending by $885 million which is short of the $946.8 million that would be required to maintain current services for the growing population, keep up with the cost of delivering services, and fulfill the obligations of policy decisions like increasing teacher pay.
In the upcoming development of the state’s two-year budget, state policymakers will need to find a way to pay for roughly $400 million of the $900 million in tax cuts that went into effect in January. This should prompt a transparent conversation about the fully cost of our state’s tax cuts since 2013 and the choices on the investment and revenue side that can support our growing state.