The jobs engine has slowed in 2018, increasing the odds that the current economic expansion will fail to usher North Carolina back to pre-recession levels of employment. 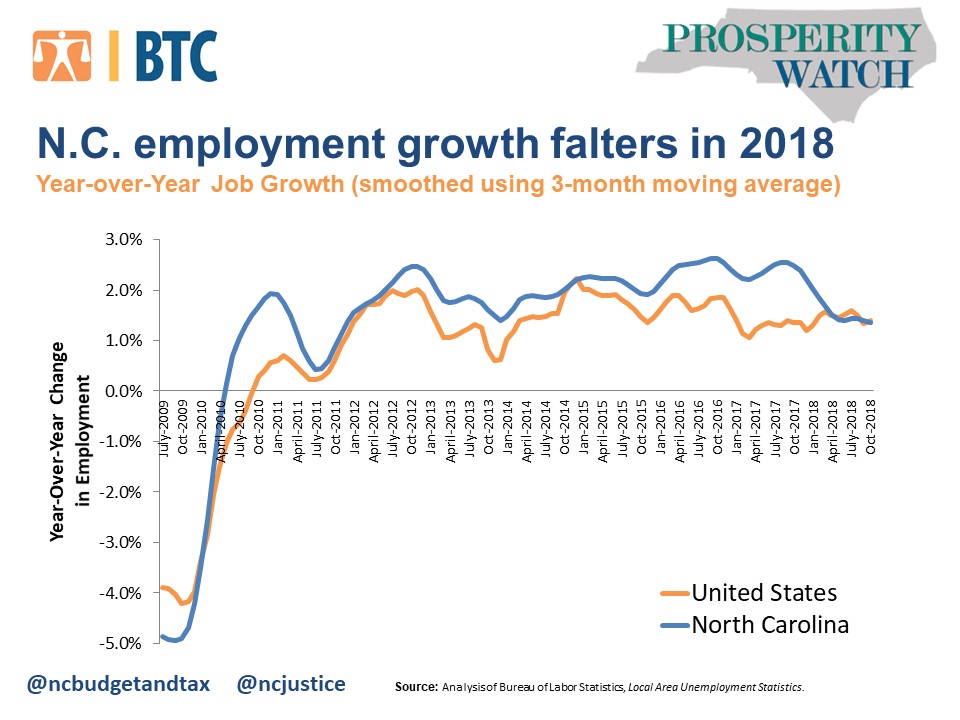 Employment growth has been historically slow ever since the Great Recession officially ended in June of 2009, but the past year has failed to live up to the modest rate achieved at several points throughout the recovery. North Carolina’s year-over-year job growth in October of this year stood at 1.3 percent, well below the 2.4 percent rate that the state posted at the same time last year.  Looking a bit further back, employment growth at both the state and national levels this year have been markedly lower than several points throughout the recovery. Throughout most of 2015 and 2016 annual job growth in North Carolina topped 2 percent and the national rate was consistently above 1.5 percent, but 2018 has failed to deliver those kinds of job gains.

The slowdown in jobs growth is all the more problematic because the level of employment still has not returned to pre-recession levels. While the headline unemployment rate in North Carolina dipped to 3.6 percent in October, basically even with the national rate of 3.7 percent, the actual percentage of people working has remained essentially flat for over a year. The most recent labor market data show 58.8 percent of North Carolinians had a job, which is identical to where we stood in May of last year. Before the Great Recession, North Carolina’s economy regularly provided jobs for over 60 percent of the state’s population, which means that we have never truly recovered to pre-recession norms for employment.

All of this indicates that North Carolina’s economy is not generating new jobs fast enough to meet the needs of a growing state. Unless something changes, the current growth cycle may ultimately fail to undo the damage inflicted by the Great Recession.