Forced collaboration with ICE would detract from other public safety priorities and expose local governments to possible fines and legal fees, as well as harming immigrants and their families.

Across the country, the rising cost of federal immigration enforcement in fiscal and human terms is generating public outcry and a renewed push for more comprehensive immigration solutions. Despite this broader context, legislators in North Carolina are pursuing more expansive enforcement of immigration policy through House Bill 370, which would force North Carolina sheriffs to act as an extension of U.S. Immigration and Customs Enforcement (ICE).

Specifically, sheriffs would be required to honor ICE detainers, a request that asks a local sheriff to hold a person so that ICE can determine whether to arrest the individual. Because these detainers are not tied to criminal cases, they aim to require local sheriffs to hold individuals without probable cause, a violation of their Constitutional rights.

These detainers represent costs to local governments in the form of holding someone in detention facilities and dedicating staff and other resources to training and staffing coordination with ICE. Forcing sheriffs to act as an extension of ICE also undermines public safety by diverting much needed resources away from other safety initiatives, decreasing voluntary reporting of crime, and otherwise spreading fear throughout our immigrant communities and contributing to adverse childhood experiences through the threat of family separation.

This report provides an overview of the estimated direct costs to local governments of this state legislation and provides evidence for long-term and broad-ranging costs to communities of forced collaboration with ICE.

Costs to local governments detract from other public safety priorities

Under the proposed forced collaboration between sheriffs and ICE, individuals who are arrested would be checked for their immigration status. Whereas with minor traffic violations, people stopped by law enforcement are most often ticketed and released, this collaboration could increase the number of arrests. “ICE holds” or detainers would then be issued by the federal agency as a request that local law enforcement agencies hold a noncitizen for up to 48 hours beyond their release from custody. Sheriffs would be required to hold people or would risk significant fines as outlined in the proposed legislation through a private enforcement court action. Sheriffs also would be required to resource the training and staffing commitment of existing personnel to the task of federal immigration enforcement. 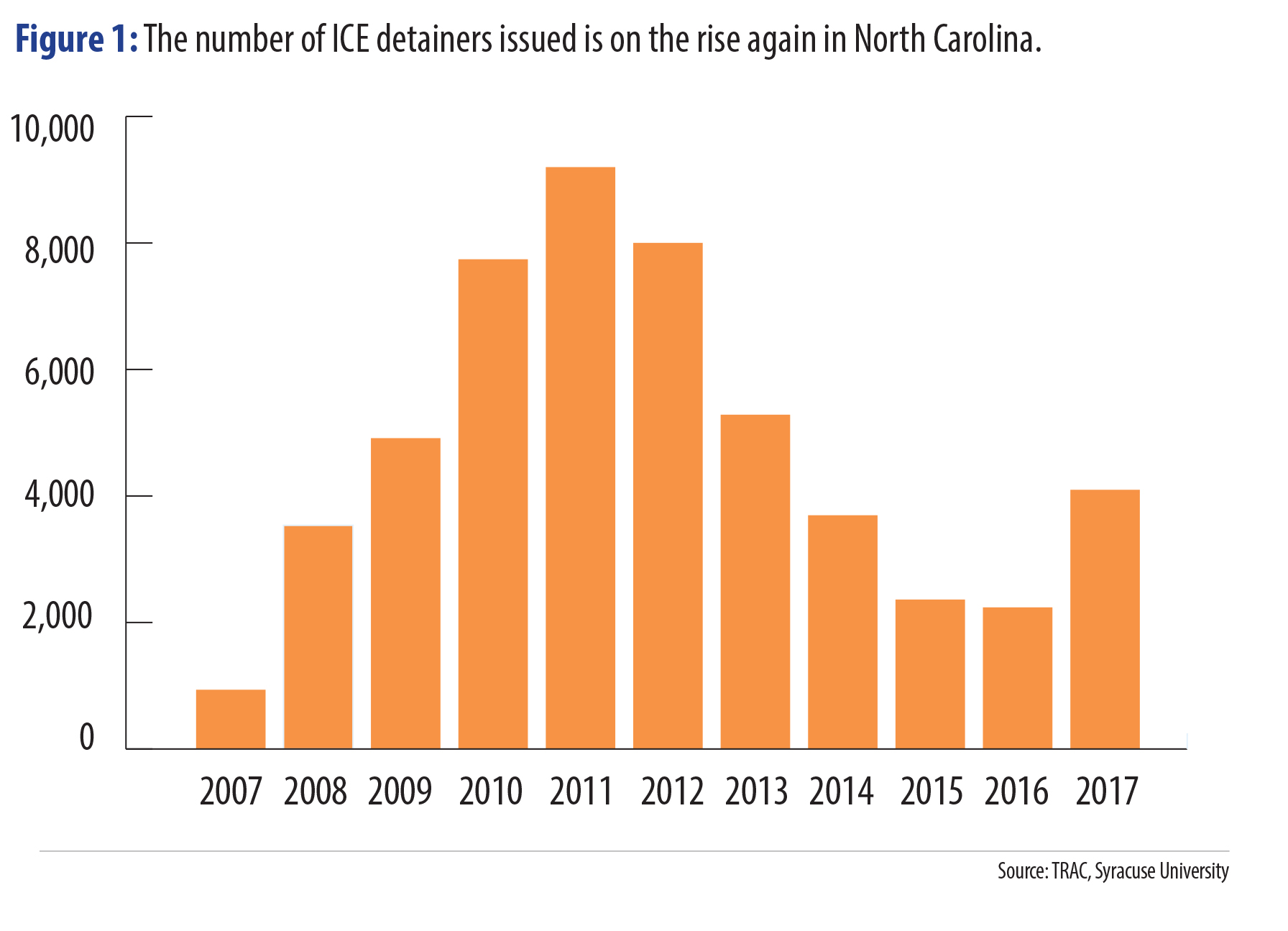 U.S. Immigration and Customs Enforcement (ICE) typically does not reimburse local jails or the state for costs associated with detaining immigrants at ICE’s request before they are in ICE custody. 1 In a letter to the County Counsel of Santa Clara County, California, ICE stated that they “do not reimburse localities for detaining any individual until ICE has assumed actual custody of the individual.”2

Additionally, as is clear from the Wake County Sheriff’s Office 287(g) agreement, costs of staffing and training must be covered by local governments:

The Wake County Sheriff’s Office is responsible for the salaries and benefits, including overtime, of its personnel being trained or performing duties under this MOA. … The WCSO will cover the costs of all Wake County Sheriff Office personnel’s travel, housing, and per diem affiliated with the training required for participation in this MOA. 3

The costs of transport, bed space, processing and all other aspects of custody are thus born almost entirely by local governments. (See Breakout Box below.)

It is important to note, as in other parts of the country, the cost of local jail detention can vary widely. The average daily cost of holding someone in North Carolina jails ranges from a high of $258 in Orange County to a low of $32 in Hoke County, according to pre-trial data for misdemeanor cases from 2013. 4 More recent data on the cost to taxpayers of holding someone in detention for ICE finds an average daily cost of $71.44. 5

Given the number of detainers issued in 2017, the last full year that data was made publicly available, the annual cost of detention in local jails cost taxpayers roughly $7.4 million. 6  As evident in Figure 1, the number of ICE detainers has been much higher in recent history, including in 2011 when the Obama administration increased immigration enforcement activities. Publicly available data on detainers for 2018 was withheld beginning in April 2018, and even existing sources may not represent a complete accounting of all detainers. 7 Given these caveats and the likely undercount had the number of detainers remained consistent with the first quarter of data for 2018, the number of detainers issued in North Carolina last year would have reached prior year peaks and resulted in annual costs to local governments statewide of $12.3 million. 8

These cost calculations are based on the average cost of holding someone in a North Carolina jail and evidence that immigrants held on detainers tend to remain in jail beyond the requested 48-hour period. 11 In California, researchers found that those with an ICE hold stayed in jail 20.6 days longer. 12 In Colorado, researchers found that figure to be 22 days. 13 Other researchers have found lengths of stay for those with ICE detainers to extend up to 30 days. 14 Data available from North Carolina jails in 26 counties seeking federal funding through SCAAP suggests that stays for those with ICE detainers average 69 days. 15

While the exact length of extended time in jail depends on various factors, it is clear that an ICE hold is likely to result in greater time in jail while forced collaboration with ICE will increase the number of people with detainers. The cost statewide of detainers to local governments using a conservative methodology is estimated at roughly $7.4 million annually with a cumulative cost for North Carolina over the past decade of $81.7 million. 16 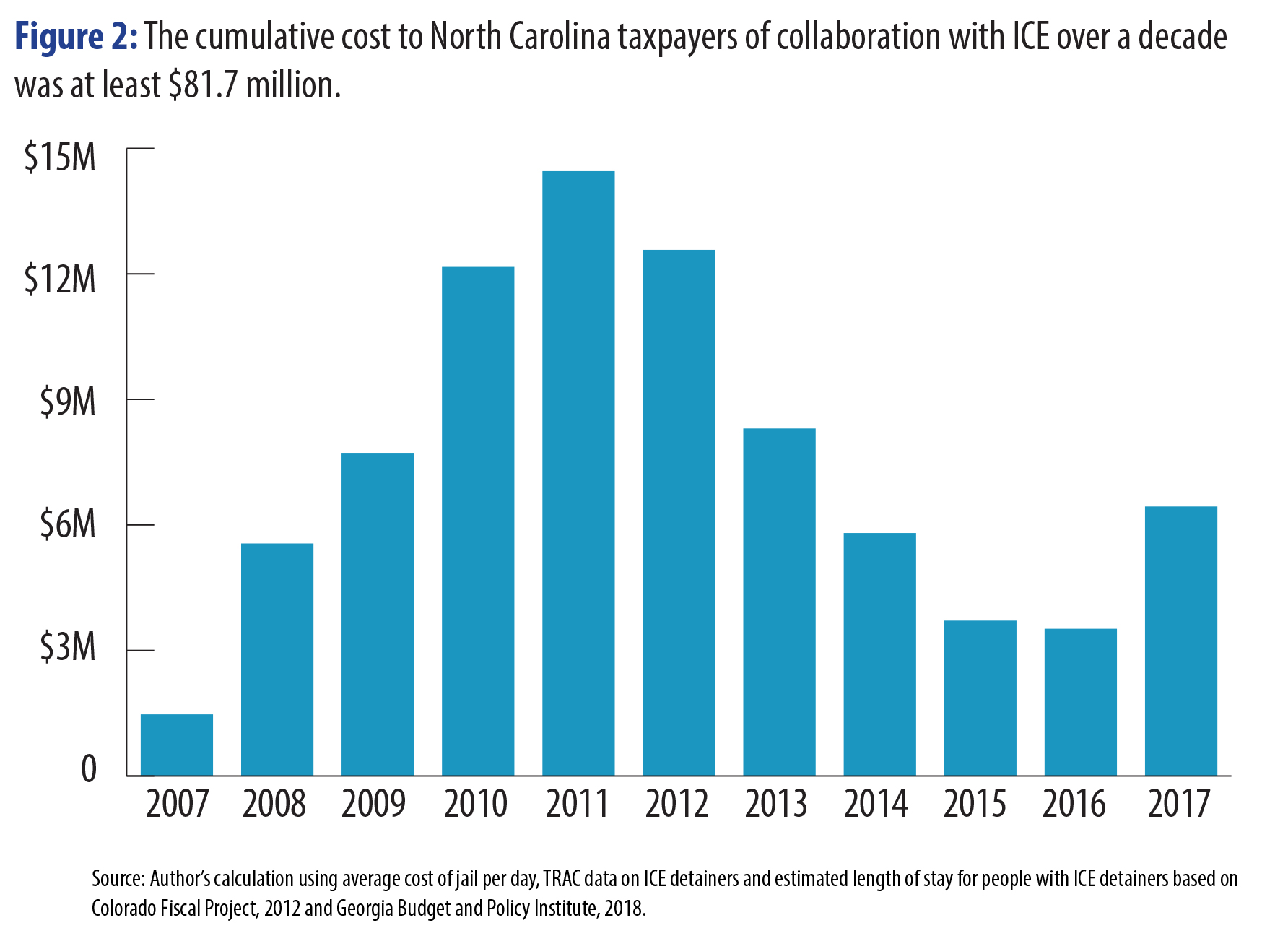 The costs to local governments in North Carolina of 287(g) agreements, or the voluntary arrangements made between local law enforcement and the federal Immigration and Customs Enforcement agency that deputize local public safety officers to enforce federal immigration law, suggest the estimates provided above are conservative. In a study of the 287(g) program in North Carolina, Mecklenburg County was found to incur an estimated $5.5 million in start-up costs for the first year of participation in the program, while Alamance County’s costs were estimated to be $4.8 million for a program year. 17These costs included salary of dedicated officers to the program, the training of those officers and the detention of people over a period of time.18 In Henderson County, the county budget includes a specific line item to denote local spending on Immigration and Customs Enforcement, which totalled nearly $500,000. 19

A recent Georgia report calculated the annual cost of ICE detainers to the entire state to be $9 million on average annually and $88 million in total over a decade. 20 The Georgia Budget & Policy Institute also cataloged state-level costs of local enforcement of immigration law across the country. The Institute’s findings suggest that, while costs are high, they vary with the size of the state’s population and its total immigrant population.

In Texas, the state’s corrections department said it cost local jails $71 million statewide in 2017 to hold people on federal immigration detainers. In Colorado, where a 2011 law required local governments to honor detainer requests, an independent 2012 report pegged the price at $13 million a year. And a 2013 review of Washington state found that detainers cost an estimated $3 million a year. 21

These costs aren’t likely to generate public safety benefits. Researchers have found that ICE enforcement is poorly targeted, resulting oftentimes in detention of those with traffic violations and misdemeanors — not serious crimes. There is also a growing body of evidence that suggest there is no significant impact on crime levels in a community from collaboration with ICE and the higher number of detainers issued.22

Additional costs to local governments — cities, counties or law enforcement agencies — beyond the cost of detention are likely given the provision of the bill that would fine local governments daily for non-compliance with this state law as well as the potential for litigation due to unlawful detention.

First, fines would be applied if any person brings forward a claim that the city, county or law enforcement agency is not cooperating with federal immigration enforcement or not in compliance with state laws surrounding immigration. The fines would increase significantly over time, from $1,000 the first day to $25,000 for each subsequent day. 23 A local government could thus incur a fine of $151,000 for just one week of non-compliance. That figure represents the equivalent of the salary for at least two deputy sheriff investigators.24

Second, the potential for litigation costs to increase for local jurisdictions are great. Lawsuits brought by detained individuals whose rights have been violated by these would-be obligatory and unconstitutional detentions have resulted in required payments by local governments to defendants and legal fees. A review of just a sample of recent cases shows that these costs can be significant.

North Carolinians voted against proponents of ICE detainers and other anti-immigrant measures in November when several sheriffs won elections in North Carolina counties by promising to limit when they would comply with these unconstitutional requests. 26 There are currently four counties with voluntary 287(g) agreements to collaborate with ICE: Cabarrus, Gaston, Nash and Henderson. However, the N.C. Sheriffs’ Association notes that the majority of sheriffs in North Carolina honor ICE detainer requests. 27

When local law enforcement agencies become intertwined with immigration enforcement, it erodes the trust between immigrant communities and the police, making immigrants less likely to report crimes, which in turn makes our communities less safe for everyone. 28 In a time when fear and confusion are already rising as a result of retaliatory ICE enforcement operations, 29 the forced collaboration with ICE in communities across the state will further harm trust in law enforcement and community cohesion.

There is a growing body of research and evidence exploring how traumatic or stressful childhood experiences impact people throughout their lives. This Adverse Childhood Experiences (ACEs) framework measures the long-term effects of negative experiences occurring during developmental years. 30 Extremely stressful experiences, including family separation and deportation, can change the architecture of the brain and lead to lifelong negative effects on health outcomes. 31 Children who experienced a family deportation or detainment are subject to psychological trauma, financial instability and pool health outcomes. Children living in mixed-status families also experience high level of ACEs due to the persistent fear of potential separation. While no specific data for North Carolina is available, estimates of the economic losses from ACEs calculated in nearby Tennessee show a significant cost from illnesses and medical care and resulting worker absenteeism. 32

The ethical and social costs associated with states and localities undertaking federal immigration enforcement duties are insurmountable for immigrants and citizens alike. A recent report released by a division of the American Psychological Association delineates the effects of deportation and separation on entire communities. 33 When a significant subset of a community is exposed to the devastating effects of deportations, the larger community also partakes in the psychological stress and the mistrust of public institutions. Entire families then become fearful of important activities in daily life, such as spending time at their children’s school or accessing the health care or benefits to which they are entitled or refraining from participating in social and civic activities.34

The criminalization of immigration can lead to powerful dilemmas for families and to systemic barriers to achieving greater safety and well-being in local communities. As such, this approach leads to negative health and economic outcomes for the children of immigrants and their families, as well as the broader community.

Policies that enhance immigrant inclusion in our society — rather than create costly and ineffective systems that harm entire communities and divert resources from sound public investments — are more likely to strengthen the quality of life for every person in every community across the state.