More than a quarter of North Carolinians face asset poverty

For far too long, the American Dream has promoted the values of hard work and grit at the sole keys to success. While that proposition has never been a reality for all Americans, the promise of the American Dream is slipping progressively further away from reality.

At 25.5 percent, North Carolina has the 19th highest rate of asset poverty in the nation. New data from Prosperity Now shows that around 2.5 million North Carolinians do not have access to enough money, assets, or resources to persist through a medical emergency or job loss. It also means these families do not have enough resources to invest in a home, business, or education. This lack of wealth among more than a quarter of our state severely hampers our residents from achieving economic mobility.

Not everyone is equally affected by wealth inequality and asset poverty. A person’s race and the generation they were born into have an impact on how much wealth they are able to accumulate. 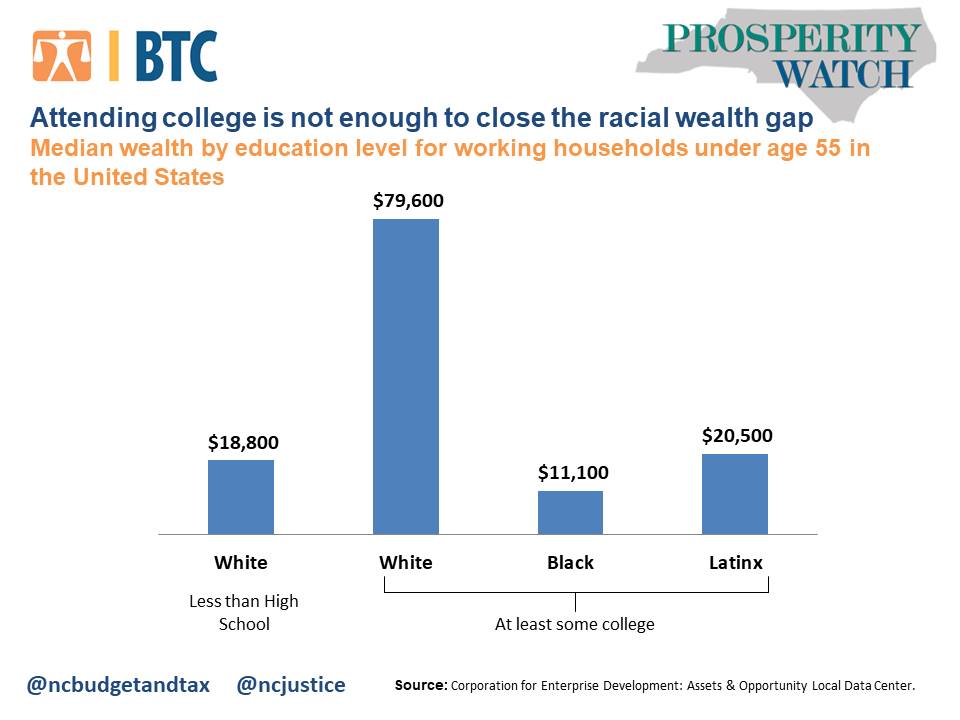 New data from Demos and the Institute for Assets and Social Policy highlight the racial wealth gap, showing just how out of reach economic mobility is for far too many Americans. According to the report, a white family without a high school diploma has median wealth of $18,800, while a Black family with at least some college has a median wealth of only $11,000. Meanwhile, a white family who has attended college has a median household wealth of $79,600. This data shows that in many cases, educational attainment is not enough to ensure economic stability. Similar trends are found in working behavior. Black and Latinx families who work full-time have a median wealth of $10,800 and $15,300, respectively. White families who work full-time have a median wealth of $82,400.

There are many reasons why people of color and younger generations such as millennials are facing challenges in building wealth.  Our state and our nation have a long history of legally excluding Black and brown people from traditional wealth building tools such as property and home ownership. Additionally, increasing college costs and skyrocketing student loan debt is making it more difficult for younger Americans to save. This data challenges our longstanding narrative that the only thing necessary for success is hard work and achievement. A strong North Carolina is one where every citizen, regardless of their race or what generation they were born into, is able to enjoy the fruits of their hard work.