Operating a quality public school system is one of the primary responsibilities of state government. North Carolina’s Constitution and general statutes place a particularly high level of responsibility on state lawmakers. Our constitution requires the General Assembly to “provide by taxation and otherwise for a general and uniform system of free public schools,” and our statutes clarify that the state government is entirely responsible for providing schools’ operating funds.

When it comes to operating expenses, no input is more important than the classroom teacher. Studies consistently demonstrate that the teacher is the most important in-school factor for student success. Smaller class sizes allow teachers to personalize instruction and provide more hands-on assistance to struggling students. Further, investing in teachers provides an important signaling effect, enticing families of means to keep their children in the public school system and thus providing the socio-economic mix in the classroom that has been demonstrated to support children’s learning. A recent study in California found that performance of all students rose after smaller class sizes created greater socio-economic integration in the public schools.

Despite what we know about the importance of teachers, North Carolina lawmakers have failed in recent years to prioritize investment in teachers. 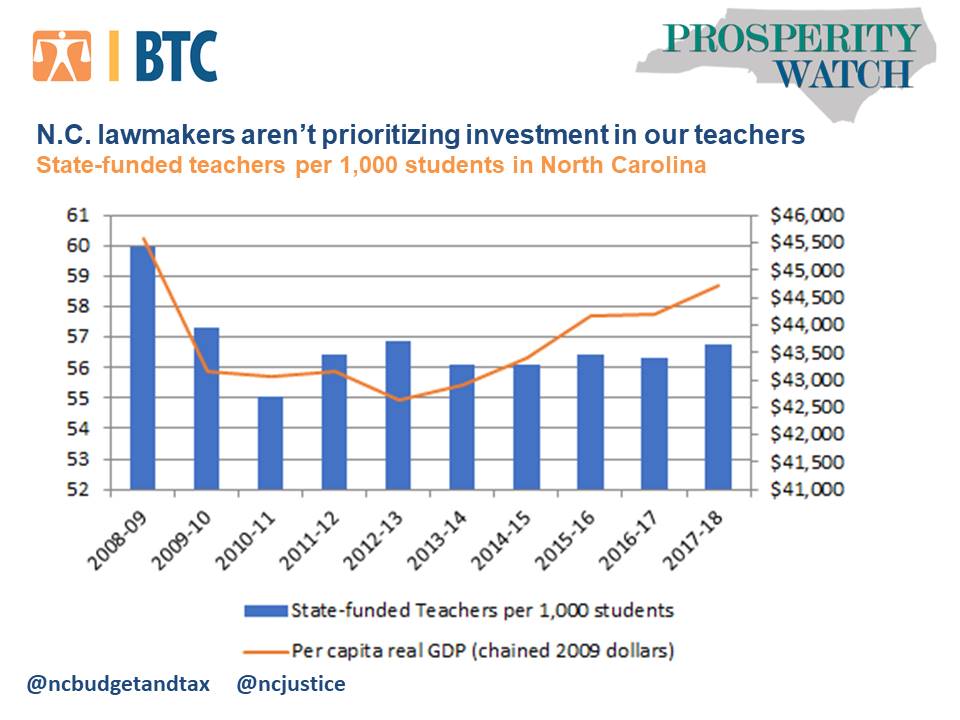 The number of state-funded teachers per student fell during the Great Recession, as revenue shortfalls required substantial budget reductions. But even though our state’s economy has begun to rebound, lawmakers have failed to restore state investment in teachers to pre-Recession levels. While per-capita state wealth is nearing pre-Recession levels, investment in teaching positions remains flat. Rather than restoring investment in our public schools, North Carolina lawmakers have prioritized tax cuts that have mostly benefited corporations and the wealthy.

These tax cuts have made it increasingly unlikely the state will ever fully restore investments in our inclusive public school system. A further round of tax cuts that go into effect Jan. 1, 2019, will reduce state revenues by another $900 million. Restoring the number of state-funded teachers to pre-Recession levels would cost approximately $249 million. All told, when the Jan. 2019 tax changes have gone into effect, North Carolina will have $3.5 billion less in investment.