Neighborhoods all over N.C. continue down path to gentrification

North Carolina is experiencing substantial population growth, particularly in its cities.[1] More than 60 people a day move to Wake County.[2] The state’s urban economies are growing, but that tide is not lifting all boats. While populations are trending upward, racial gaps in education, wages, and poverty have persisted or increased. [3] Wages remain stagnant.[4] Communities’ demographics are changing as increasingly more well-resourced white people purchase homes and move into lower-income, predominately brown and Black neighborhoods.[5] With few protections for the current residents, a growing portion of the state is not only facing gentrification, but the jarring reality of displacement from communities they have called home for decades.[6]

Gentrification is generally recognized as the movement of high-income, highly educated white people into low-income urban neighborhoods of color. How gentrification is precisely measured differs across researchers and geographies, but the components are often the same. The influx of affluent white people into low-income communities introduces new capital, creating a broader tax base and leading to racial integration.[7][8] As social and economic capital increases, gentrifying communities often attract more government resources and private investment. While the increased funding and access to resources is beneficial for these urban economies, the process itself can be deeply painful and frustrating for current residents, many of whom have been systematically segregated and isolated by federal, state, and local policies.[9] Meanwhile, communities entrenched with high rates of poverty remain without the resources and investment needed to build opportunities and strengthen their economies.[10] Furthermore, without intervention, the momentum of gentrification often leads to displacement as rents and prices for necessary goods, such as groceries and transportation, rise rapidly without accompanying increases in wages for existing residents.

Gentrification has been described by many community members as quiet and insidious. Transitions in neighborhoods that signal gentrification are often not readily obvious. But its impact, often in the form of displacement, is deeply traumatic.  According to analysis done by the National Community Reinvestment Coalition (NCRC) in 2012, 271 census tracts were at risk of gentrifying in the state.[11] According to NCRC’s methodology, neighborhoods at risk to gentrify had median home values and family incomes lower than 40 percent of that of their closest metropolitan center (CBSA) in the year 2000.[12] Possible gentrification is determined by including all at risk census tracts and then identifying tracts that were in the top 60th percentile for increases in both median home value and the percentage of college graduates.[13] By these measures in 2012, 16 North Carolina census tracts had gentrified, and, by 2017, 17 more neighborhoods experienced the same change.[14] Without intentional policy to address the inequities and uplift the value of existing residents, more neighborhoods will continue to gentrify, putting many at risk of displacement. 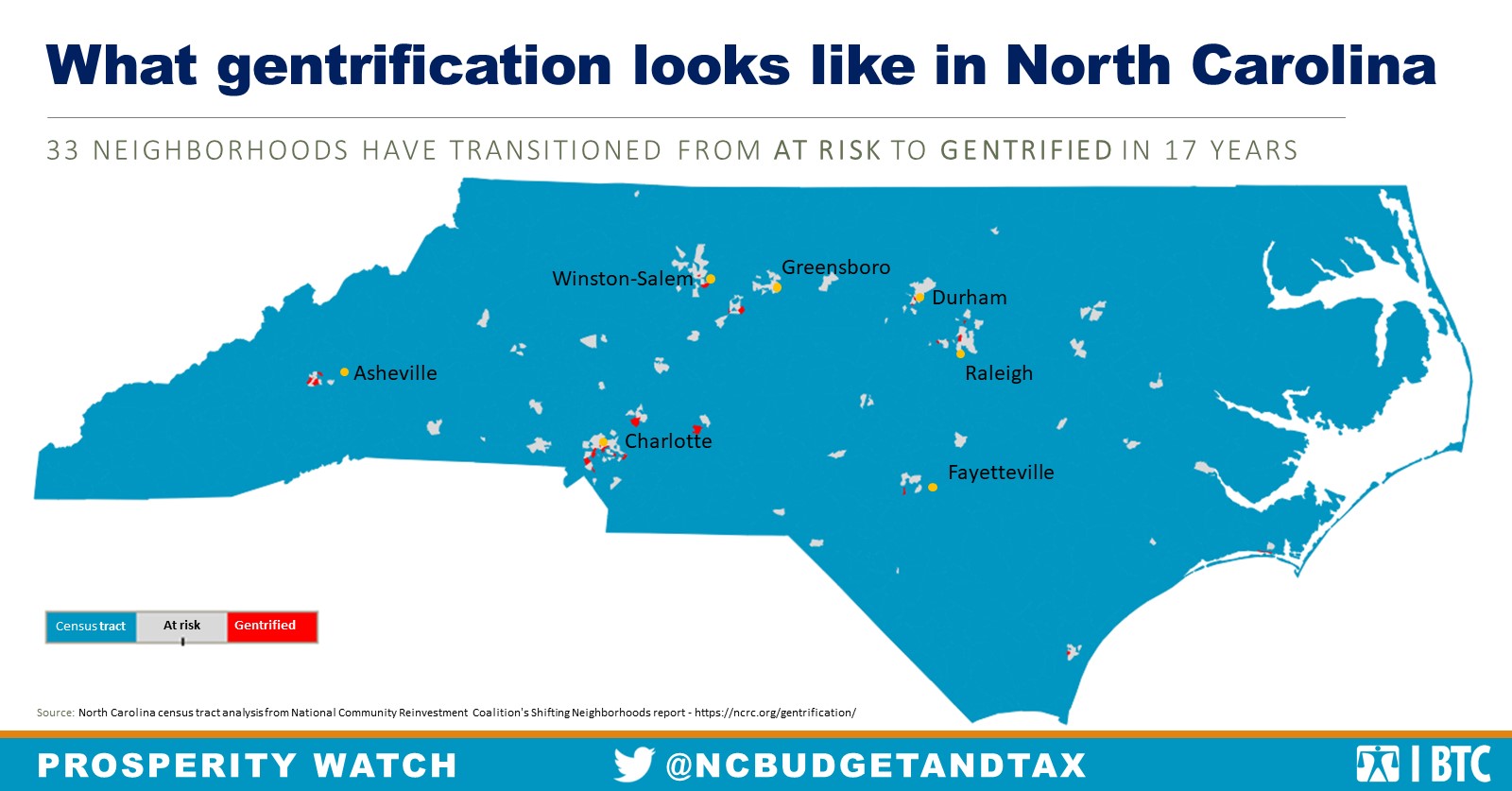 Policymakers must consider how economic development policies impact and empower residents through a race equity lens. Only then will decision-makers understand how the legacy of racism has systematically deprived communities of color of resources, only to see new capital accompany wealthier and whiter residents as they move in and potentially price them out of the communities they built. Embracing a strong race equity focus will guide policymakers in establishing stronger accountability measures and ensuring collective community benefit from sustainable and equitable growth efforts.