North Carolina stands to lose millions with the public charge

The Trump administration submitted a proposal to change the public charge rule that determines how. income, work history, health conditions, and use of public benefits may affect admission to the country or adjustment of legal status. Under the proposed rule, an individual deemed a “public charge” may be disqualified from adjusting their status to permanent residency or obtaining temporary visas. While the country has long had a public charge consideration in place, this latest change would give greater negative weight to the income of the applicant as well as their use of public programs that provide access to food, health care, and housing.

Given the potential for confusion and misinformation around this new rule, and based on past experience when immigration policy has changed, there is concern that there will be a chilling effect that could potentially lead to disenrollment from public programs that help families meet their most basic needs.  This chilling effect would affect people who are, indeed, eligible for these programs but who would choose to leave the programs because of concerns around the potential separation of their family.  An estimated 530,000 people in North Carolina could experience the chilling effect because they have at least one non-citizen in their household and participate in one of the public programs identified, according to research released by the Budget & Tax Center last week.  Further, the proposed rule will penalize immigrants who have never used a benefit program at all simply for having low incomes or a lack of work history outside the home.  This will hurt stay-at-home caregivers, the disabled, or even just working people who make low wages.  The rule will make it more difficult for those people to obtain green cards or visas, thus further harming their ability to make fuller contributions to our economy. 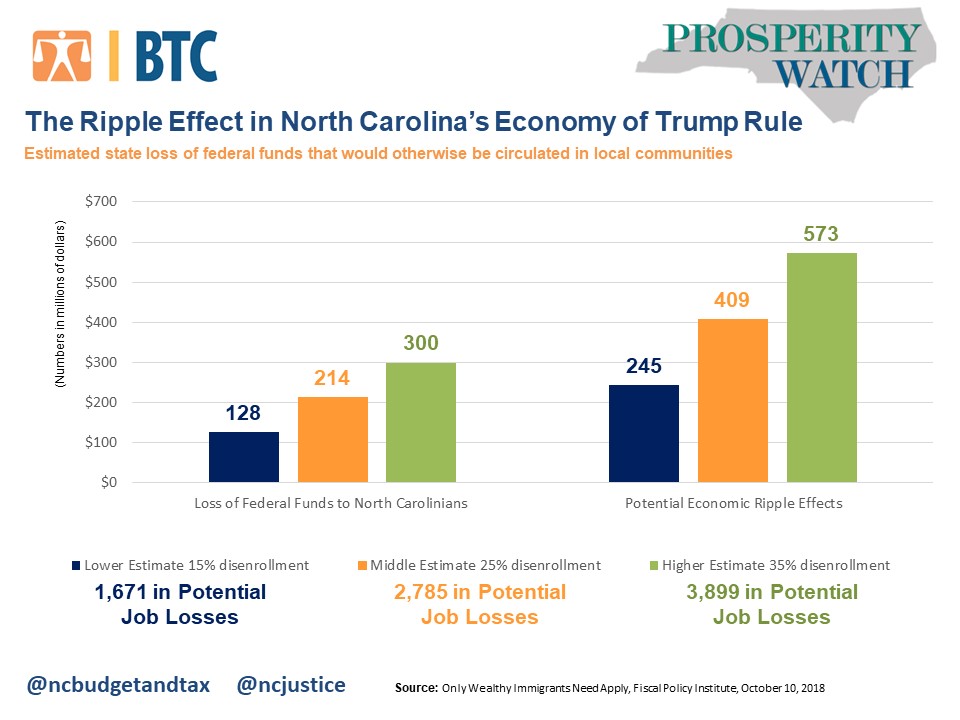 If immigrants and their family members lack the necessary resources to thrive and remain productive in their communities, then the entire community suffers. In North Carolina, this proposal will translate to a reduction in immigrant spending activity, fewer dollars flowing to local communities, and an overall economic impact of at least $245 million in North Carolina. This, in turn, has implications for potential job loss in communities as well.

Beyond the immediate effects, the research is clear that over generations, immigrants make contributions to our workforce, economy, and communities.  Their economic mobility is an important component to the long-term economic growth of the state and the country.