In North Carolina, the labor force participation rate has fallen steadily since 2007. This indicator—the number of people available to work as a percentage of the civilian non-institutionalized population— was 64.9 percent in December of 2007, meaning that 4,510,327 residents, employed and unemployed, were available to work out of a total population of 6,949,656. The total population consists of all North Carolinians who are 16 and older who are not residents in institutions such as prisons, mental hospitals, nursing homes and active duty military. By December of 2017, 4,900,294 residents were available to work from a population of 8,046,459, reflecting a labor participation rate which had fallen to 60.9 percent. 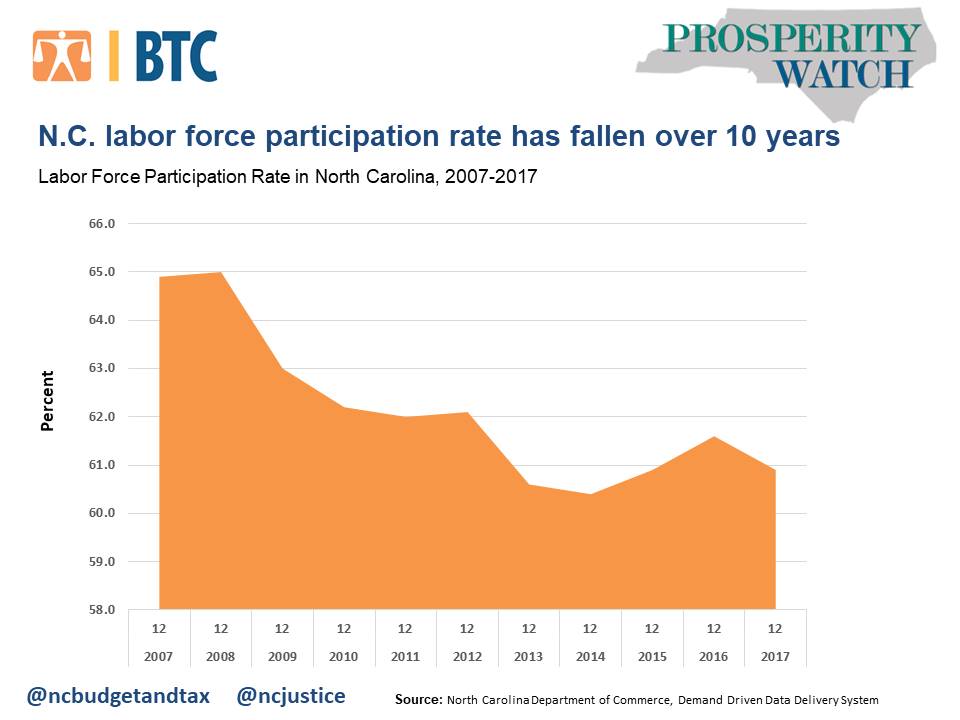 From a national perspective, the Federal Reserve Bank of Atlanta cites a couple of reasons for this decline.[1] They state that as the country becomes older, more workers will enter retirement age and will leave the ranks of those willing to work. Another contributing factor is the movement of more young workers into post-secondary education, which is at a historic high. Also contributing to the decline of labor force participation during the Great Recession was the rise of the Shadow Labor Force. These individuals are “marginally attached” to the labor market as they have searched for work in the last year but not in the last month. These are people willing to work and are waiting for jobs to return to their communities but are not counted among the labor force.  A scarcity of jobs exacerbates the plight of “missing workers”, as illuminated by the Economic Policy Institute, by keeping potential workers on the proverbial sidelines and uncounted in the official unemployment rate.[2] [3]

What does this mean for North Carolina?

As the median age in the state continues to rise, there will be fewer available workers relative to the total population. In 2010, the state’s median age was 37.4, in 2020 it will be 39.2 and in 2030 it is projected to be 40.4.[4] As the state seeks to build a diverse and capable workforce for the 21st century, special attention should be paid to the trends of post-secondary educational attainment, as well as the scarcity of jobs, which relegate many potential North Carolina workers to the shadows.