Taxes are the way that we finance investments in the public good and ensure that we invest enough in the right places today so that benefits can be reaped in future years.  To fulfill its most fundamental purpose, a tax code must raise sufficient revenue to fund the services and programs that are needed in communities.

North Carolina’s tax code is missing this fundamental mark and dangerously close to putting the state’s fiscal house out of balance.

In strict, on-the-paper accounting, North Carolina has balanced its budget despite tax cuts that have reduced revenue by at least $3.5 billion annually.  This has only been possible with the combination of cuts to programs and services and who these programs serve, as well as the use of federal funds and other funding sources.

Perhaps most importantly, policymakers changed the way that they budget by removing the expectation that every year legislators would aim to maintain current services for the state’s growing and changing population.  Rather than establish as the baseline what is needed to move communities ahead or bolster families’ well-being or protect and educate every child in any given year, the NC General Assembly leadership now does not automatically provide funding for growth in the student populations in K-12 and universities, for example. 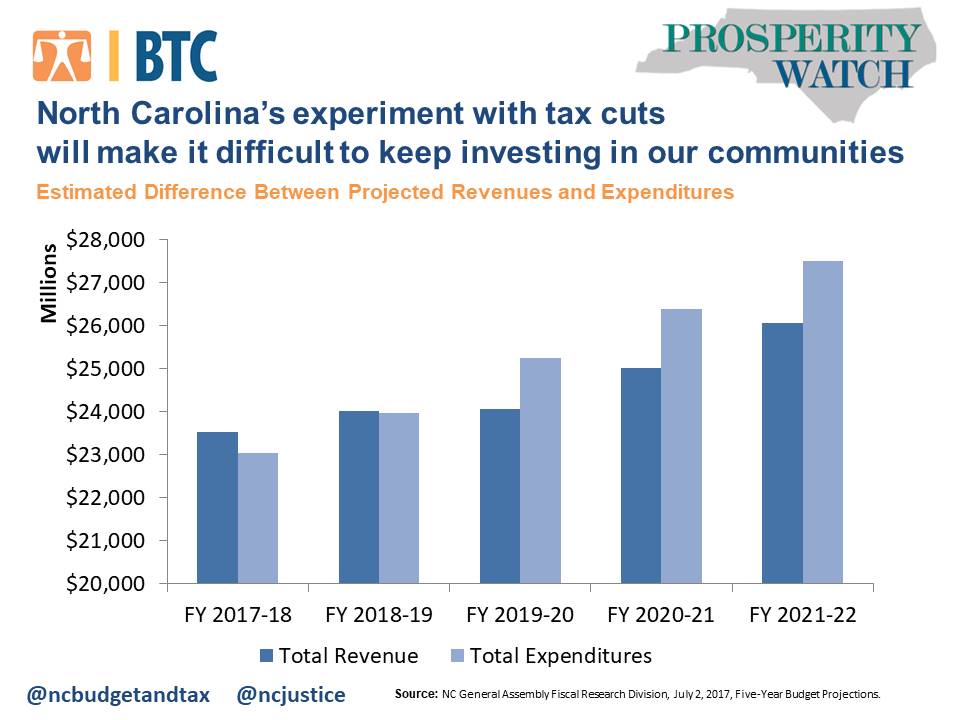 Under the 2017-19 budget, state funding increased by around $690 million from the first fiscal year to the second year. However, around $1.1 billion in additional revenue will be needed to just to keep up with enrollment growth in public education, to pay for rising costs in the delivery of Medicaid services, to meet retirement and health plan obligations for public employees, and to fund the teacher pay plan.[1] This suggests that these existing obligations will either not be fully funded or state funding cuts to public services are on the horizon, or a combination of both, in order to fund these ongoing obligations. The inadequate funding certainly leaves little to no room for new costs like cost shifts to the state in future federal budgets or another natural disaster.

In 2019, there will be rate cuts again to the personal and corporate income tax. The North Carolina General Assembly Fiscal Research Division projects that the state’s tax code will not have sufficient revenue to meet the current obligations of service delivery and infrastructure investment in communities across the state given the growing population.  The tax cuts will reduce annual revenue by an estimated $900 million.

[1]     Based on analysis by NCGA’s non-partisan Fiscal Research Division.