North Carolina has lowered its tax rates on personal income and corporate profits and increased the state’s reliance on the sales tax without ensuring that the tax code can raise the funds needed for public services. This hurts the foundation of a strong, inclusive economy, which can weaken the state’s growth and opportunities.

At the time of the initial tax changes in 2013, North Carolina ranked 26th among states for its total revenue raised through its tax system as a share of state personal income, according to U.S. Census Bureau data for all 50 states. North Carolina was never a high-tax state, yet it has a proud history of investing in public services, particularly in education. That commitment to public education and many other smart public investments are made more difficult by the state’s low tax rates that do not raise the revenue needed to ensure all communities can thrive. 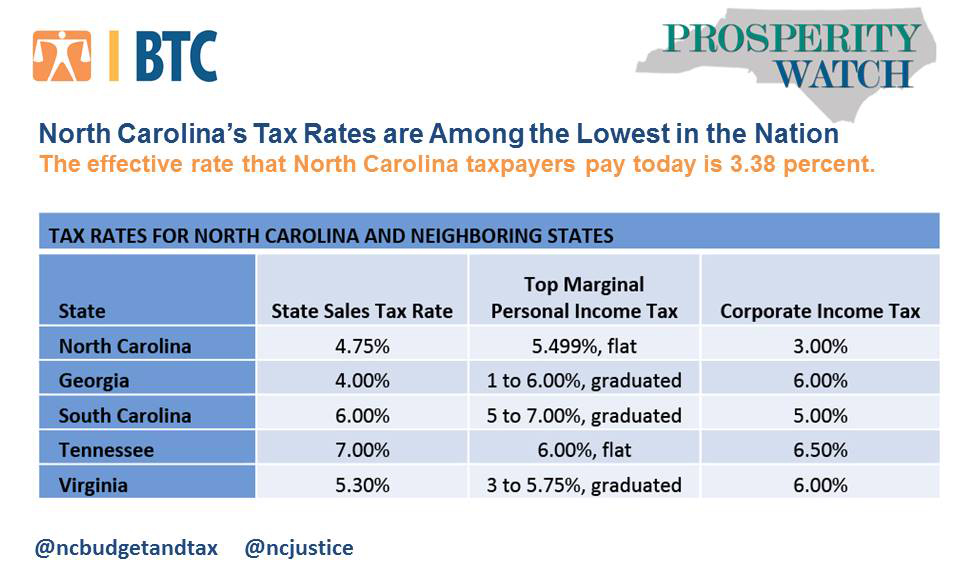 The statutory rate applied to taxpayers’ income does not reflect what they actually pay for two reasons.  First, in a graduated tax code, the top tax rate is applied only to the income above the threshold identified. So in North Carolina’s old tax code, taxpayers paid 7.75 percent only on income over $100,000. Second, the statutory rate is applied to income after adjustments for deductions are made. The effective rate that North Carolina taxpayers pay today is 3.38 percent, which is below the pre-2013 rate of 4 percent. The gap between these two figures are the dollars that could have been invested in classroom supplies, teacher pay, public health care and nursing, and environmental protection.

For more information on the different between marginal and effective tax rates, read our BTC Policy Basic here.