Recovery has not addressed racial barriers to economic opportunity and prosperity

The Great Recession fell hardest on many communities and families that were already suffering economically, and the supposed recovery has done little to unmake economic systems that disproportionately benefit white people in North Carolina.

Disparities in outcomes did not come out of thin air; they arise from systems and policies, past and present, that create barriers to economic opportunity for people of color. For example, inequity in pay, rooted both in occupational segregation and in people of color being paid less for doing the same work as their white colleagues, is a major reason that communities of color struggle with higher levels of poverty. 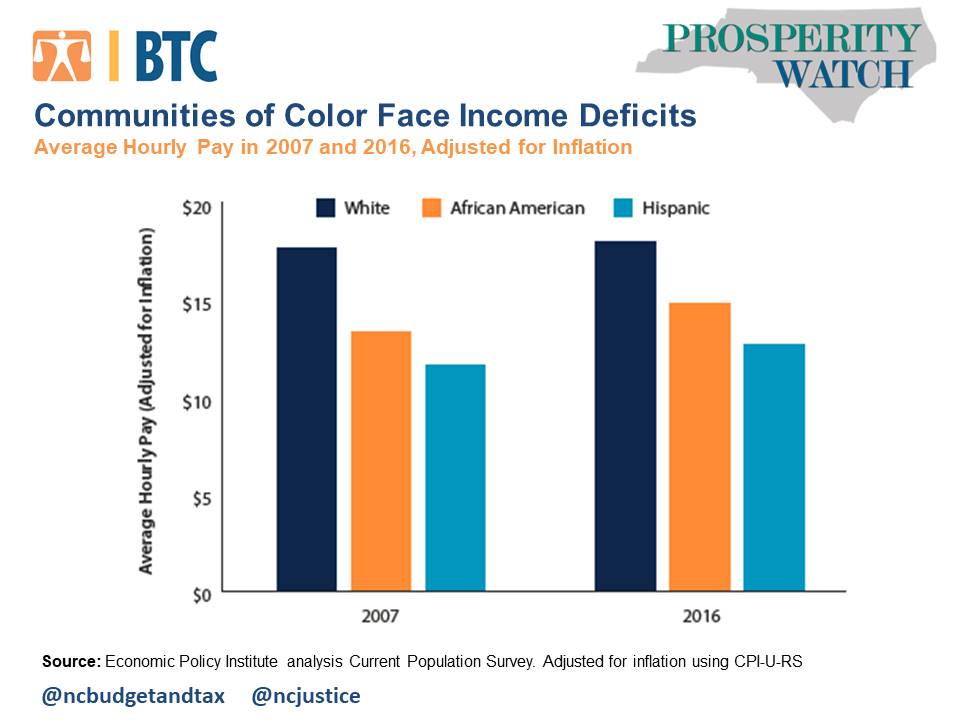 African American workers in North Carolina were paid roughly $3.25 per hour less on average than their white colleagues in 2016, a gap that compounds rapidly over time into a monthly pay disparity of almost $600 and a deficit of more than $6,700 annually. The gap is even larger for Hispanic workers in North Carolina, who are paid $5.34 less than whites on average, which compounds into a pay gap of over $11,000 annually.

The damage over decades and generations is even more profound. If it remains, the 2016 pay gap would mean that white workers in North Carolina take home roughly $67,000 more than their African American colleagues over a decade, and $111,100 more than their Hispanic coworkers. To put that in context, an African American worker earning the state average for their demographic group in 2016 ($14.81) would have to work more than 12 years to make up the same amount that a white worker earns in 10 years. A Hispanic worker would have to work more than 14 years to take home the wages a white worker would be paid over a decade.

Compounding wage deficits are a major reason that many communities of color face elevated levels of poverty. The 2016 poverty rate for white residents came in at 12 percent in North Carolina, while the rate for Latinx North Carolinians was over 27 percent, 25.5 percent for American Indians, and 23.5 percent for black people. Some of these gaps in poverty rate have narrowed slightly in the past decade, largely driven by a generational change as older white people exit the labor force and are replaced by more young people of color. But the racial barriers to economic security are clearly with us still.

All of these figures clearly underscore the persistent barriers to economic opportunity facing people and communities of color. Prospects may have improved since the worst days of the Great Recession, but the subsequent recovery has done very little to reduce the obstacles that make it difficult for many people of color to achieve economic stability and prosperity.