As the federal government moves to investigate the perceived harm that affirmative action has inflicted on white college hopefuls, it’s important to separate truth from fiction. This investigation is powered largely by myths, one of which claims that affirmative action policies give minority students a free ride to college. The truth is that the rising cost of a college education has had large and lasting negative consequences on low-income students, and those consequences have disproportionately hurt students of color.

Nationwide, just under 40 percent of Black 25- to 55-year-olds have some form of student loan debt. The number drops to around 30 percent for Hispanic, or Latinx, and white people. But the incidence of student loan debt isn’t the sole issue. There’s also a wide racial gap in average debt amounts.

Black students and their families incur twice as much student loan debt upon graduation. According to a 2016 Brookings Institute report, four years after graduation the black-white debt gap more than triples from $7,400 to $24,720. 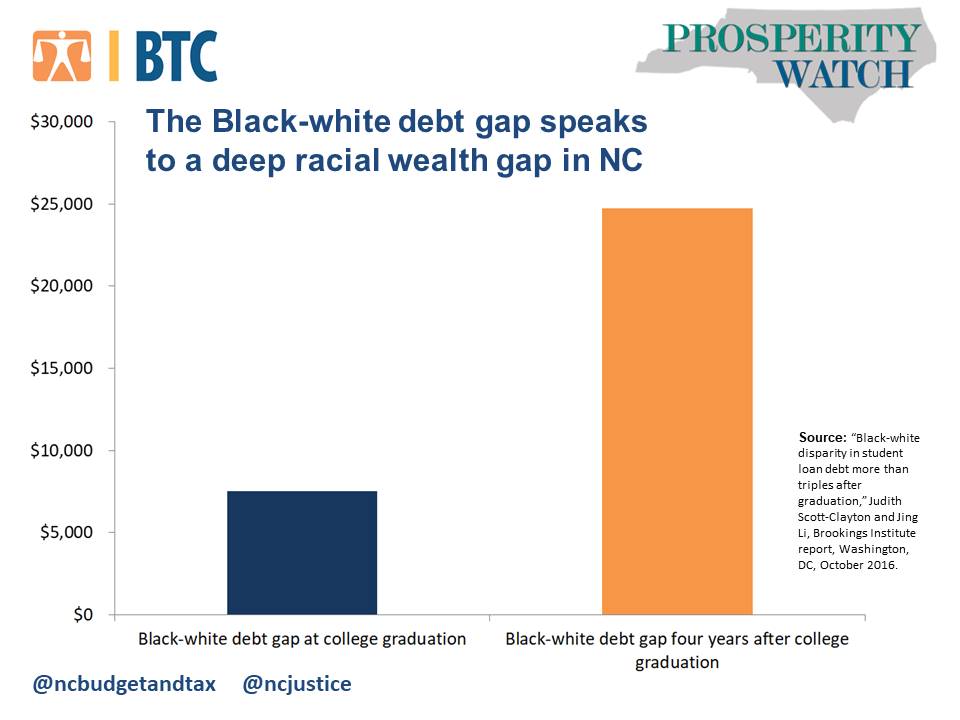 The student loan debt gap is both a symptom of the racial wealth gap and a contributing factor to it. Not only do workers of color face an earnings gap, but they also have lower homeownership rates. That means they’re less likely to have the option of taking out a second mortgage, for instance, to pay for their child’s tuition. So, they’re more likely to take out loans with punitive interest rates, so the child graduates with more debt than his or her white peers. Instead of intergenerational wealth, communities of color are more likely to suffer intergenerational debt. And as North Carolina tuition costs continue to rise, this problem will worsen and the racial wealth gap will continue to widen.

Nearly two-thirds of North Carolina college graduates collect student loan debt along with their degrees. Meanwhile, state funding for public universities has declined since 2008, which puts the burden of funding on tuition-paying students. And the debt amounts bear that burden out—over the past 10 years, the average student loan debt has increased from roughly $16,000 to $25,000, while the median income in our state has barely budged.

So while the federal government continues to question minority students’ presence in colleges, those same students are increasingly getting priced out of a college education and the ladder to the middle class that that education used to provide.