Tax cuts have left N.C. in the middle of the regional pack

North Carolina’s experiment with tax cuts was held up as an example last fall when Congress was debating tax policy and, if the North Carolina experience is any guide, the economic impact of recent Federal tax cuts is likely to disappoint. The evidence from North Carolina shows that tax cuts don’t address our most pressing economic challenges and don’t supercharge the economy as their proponents often claim.

A new analysis by the Center for Budget and Policy Priorities confirms that North Carolina has lagged several of its neighbors since 2013, when the recent wave of tax cuts started. North Carolina has been decidedly middle-of-the-pack compared to its immediate neighbors, not the exemplar of rapid growth that it is often claimed to be by proponents of state and federal tax cuts. 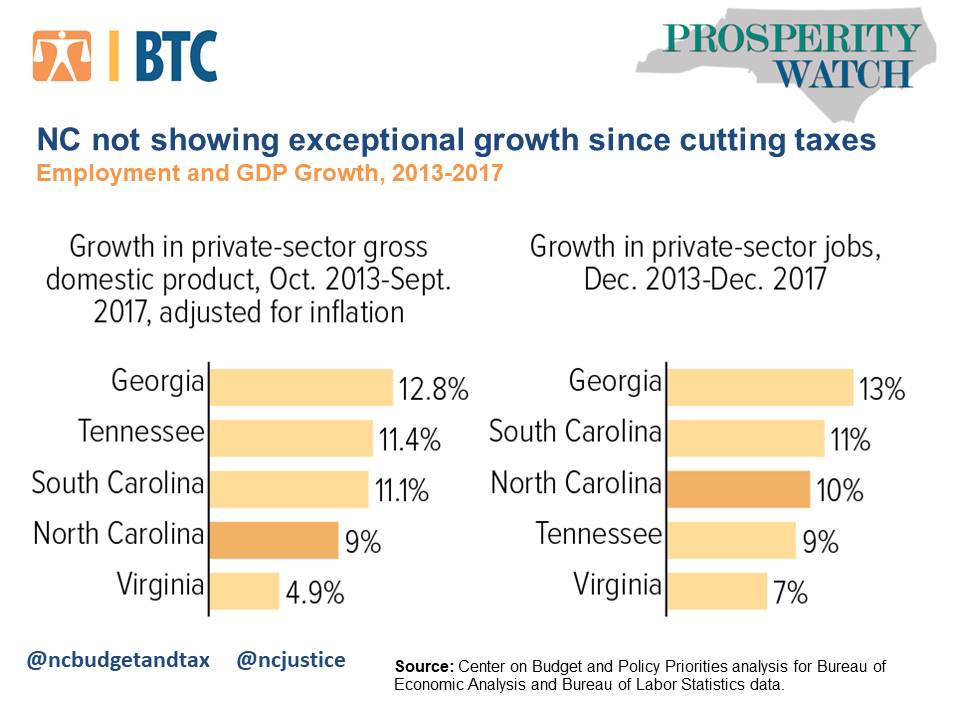 From the time North Carolina started cutting corporate and income taxes through the end of last year, gross domestic product (a measure of the value of all goods and services created in North Carolina) grew by 9 percent, well behind all of our immediate neighbors with the exception of Virginia. In job growth, North Carolina’s growth rate of 10 percent was closer to the average for our neighbors, but still substantially shy of Georgia’s 13 percent growth clip. Georgia topping the list is particularly telling because that state continues to have a progressive tax structure where higher-income residents pay a higher marginal tax rate, and it has a corporate tax rate that is double North Carolina’s. If low personal and corporate taxes were the key factor driving economic growth, North Carolina should have been soundly outpacing Georgia over the past few years, but evidence shows the opposite what happened.