In the past week, there has been a lot of discussion of the drivers of North Carolina’s economic recovery. Noticeably absent from the conversation have been two realities: the overwhelming lack of evidence to tie the state’s policy choices to job growth, and the fact that the job growth that is happening isn’t reaching the areas of the state that need it the most.

Almost 550,000 jobs have been created since the recovery began in 2009, but more than half of that job growth in North Carolina has occurred in urban counties. The five largest counties in the state (Durham, Mecklenburg, Forsyth, Guilford and Wake) have accounted for 58.9 percent of the jobs created since the recovery began, or 322,691 jobs out of 547,778. That left 225,087 jobs for the other 95 counties—a clear sign that most places in North Carolina have not prospered from the latest round of tax cuts. 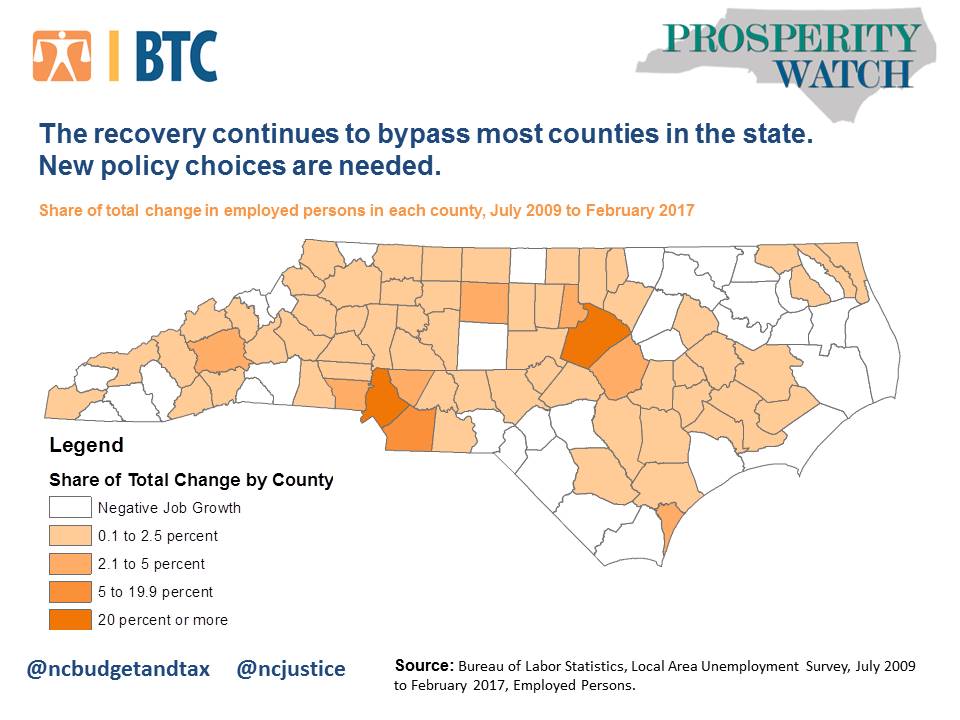 Mecklenburg and Wake counties account for 27.6 percent and 20.7 percent of the job growth in North Carolina since July of 2009. Durham, Guilford and Forsyth counties represented 4.2 percent, 4.2 percent and 2.2 percent of job growth, respectively. Counties situated in the Charlotte, Raleigh and Durham-Chapel Hill metropolitan statistical areas (MSA) such as Union, Cabarrus, Gaston, Johnston, Iredell, Orange and Rowan collectively explained another 19.2 percent of job growth in North Carolina. Adding those up, job growth tied to these urban clusters in the state are responsible for 78.2 percent of the job growth in the state since the recovery began. When adding counties in the Asheville and Wilmington MSA clusters, that figure leaps to an incredible 85.6 percent.

The North Carolina General Assembly leadership continues to suggest that income tax cuts will help grow jobs in rural North Carolina, despite the reality that $2 billion in net tax cuts have not improved the distribution of jobs across the state. The reality is that income tax cuts are a poor tool to address the underlying challenges facing rural North Carolina:  low-incomes of residents, crumbling infrastructure and the loss of locally owned businesses that could serve as the foundation of long-term growth. The particular design of tax cuts by the NC General Assembly have failed to address these core issues and instead delivered the greatest benefit to the state’s wealthiest taxpayers and profitable corporations.