Micropolitan areas have a unique role in the geography of North Carolina as the bridge between the state’s urban centers and rural communities. A micropolitan statistical area is a geographic area focused on an urban cluster with a population of at least 10,000 but less than 50,000 (Office of Management and Budget, 2009).  North Carolina has 24 such regions in the state: Albemarle, Boone, Brevard, Cullowhee, Dunn, Elizabeth City, Forest City, Henderson, Kill Devil Hills, Kinston, Laurinburg, Lumberton, Marion, Morehead City, Mount Airy, North Wilkesboro, Oxford, Pinehurst-Southern Pines, Roanoke Rapids, Rockingham, Sanford, Shelby, Washington, and Wilson. These communities represent important but understudied areas of the state that have the potential to bridge some of the state’s most rural places with the even more densely populated metropolitan areas. 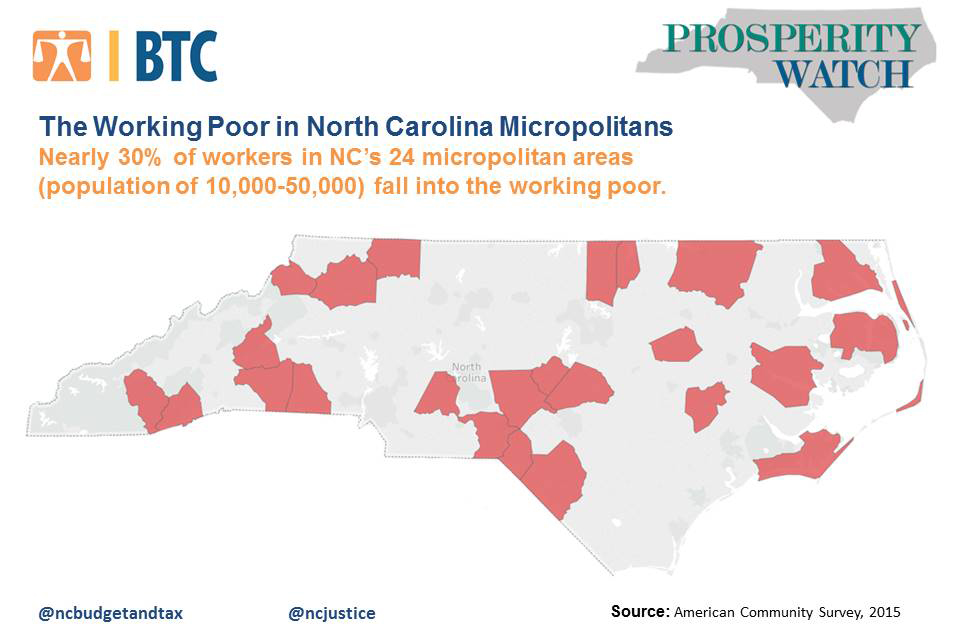 Examining micropolitan North Carolina is important. While not presently as dense in terms of population, micropolitan statistical areas are the pool for maturing, prospective metropolitan centers and also a window into historic patterns of community building that, in some cases, have been hit hard by broader economic and demographic trends. Understanding the nature of these evolving geographies—their economic conditions and approach to creating opportunity — is a good way to ensure that potential growth is inclusive and supportive of the broader state economy’s growth trajectory.

It is also worth highlighting the interdependency and interconnectedness of rural and urban spaces throughout the state. Micropolitan communities are often the links that connect extreme rural spaces in the state to more urban centers. Wake County can receive its peanuts and pork from Bertie and Martin counties, from which restaurants on Fayetteville Street base their most famous delicacies. In exchange, Bertie and Martin counties can receive fiber-based telecommunication infrastructure from information technology originating in Wake County. However, without the Roanoke Rapids and Wilson micropolitan areas serving as anchors for the larger rural region, the commercial relationship between Wake, Bertie and Martin counties becomes much more challenging.

From community to community, varying characteristics shape the nature of economies, demography, and amenities that influence a micropolitan’s quality of life. One such characteristic provided by the 2010-15 American Community Survey reveals the percent of population with income below the poverty level—also known as the percent of population that is working poor. According to the Bureau of Labor Statistics (2013), these are workers who spent at least 27 weeks in the labor force annually but remain under the poverty threshold. The working poor struggle to make ends meet, which means there are fewer dollars circulating in the economy.

Collectively, almost 30 percent (29.7 percent) of workers in North Carolina’s micropolitan statistical areas are classified as working poor (American Community Survey, 2017). This has serious implications for collective prosperity. In regions with chronically high rates of working poor, it can affect the area’s ability to raise taxes that can support local public services, as well as the resulting performance of schools and the increased reliance on public benefits to close the gaps in household budgets between earnings and basic needs.

Micropolitans that have a greater share of workers living in poverty is the direct result of a history that has excluded communities from opportunity and policy choices that have driven the decline of middle-class jobs and industry — both of which by extension have eroded the tax base. This is evidenced by analysis that shows the connection between higher levels of working poor populations and educational attainment. This link means that as a micropolitan region’s share of the population with less than a bachelor’s degree increases, so does its share of working poor. Struggling communities like Laurinburg, Lumberton, Henderson, Kinston, Rockingham and Roanoke Rapids have populations where anywhere from 81 percent to 88 percent have less than a bachelor’s degree. In more prosperous communities, such as Kill Devil Hills, Brevard, Boone and Pinehurst-Southern Pines, this population is much smaller, ranging from 60 percent to 74 percent.