Without adequate policy changes, the racial wealth gap may never allow for prosperity for all

During Black History Month there has been widespread recognition and celebration of the advancements and accomplishments of Black Americans in honor of their resilience and perseverance, despite the racism and oppression that has long characterized their history. From being forced into slavery for centuries to segregation, systemic discrimination, and exclusion from economic, political and educational opportunities because of the color of their skin, this history has resulted in inequities in economic outcomes.

While Black Americans are now able to utilize once completely inaccessible resources — property, education, and employment — that serve as key components to prosperity and overall well-being, barriers to full enjoyment of these tools to achieve well-being persist, and the cumulative and persistent result of blocks to building wealth put economic stability out of reach for many African Americans.

Wealth is the difference between one’s assets and debts; it provides protection against economic shocks and access to needed capital for families to take advantage of economic opportunities that help propel families out of poverty and better position future generations. While wealth has profound benefits, not everyone has access to wealth, particularly communities of color as they experience immense wealth inequality in the United States. Joint research from the Institute on Taxation and Economic Policy and Prosperity Now found that as recently as 2016, the median net worth of Black and Latinx families was $17,000 and $21,000 respectively, which is a fraction of the $171,000 median net worth of white families. When consumer durable goods — automobiles, electronics, and furniture — are subtracted, the median net worth decreases to $3,400 and $6,300 for Black and Latino families respectively and decreases to $140,500 for White families.[1] 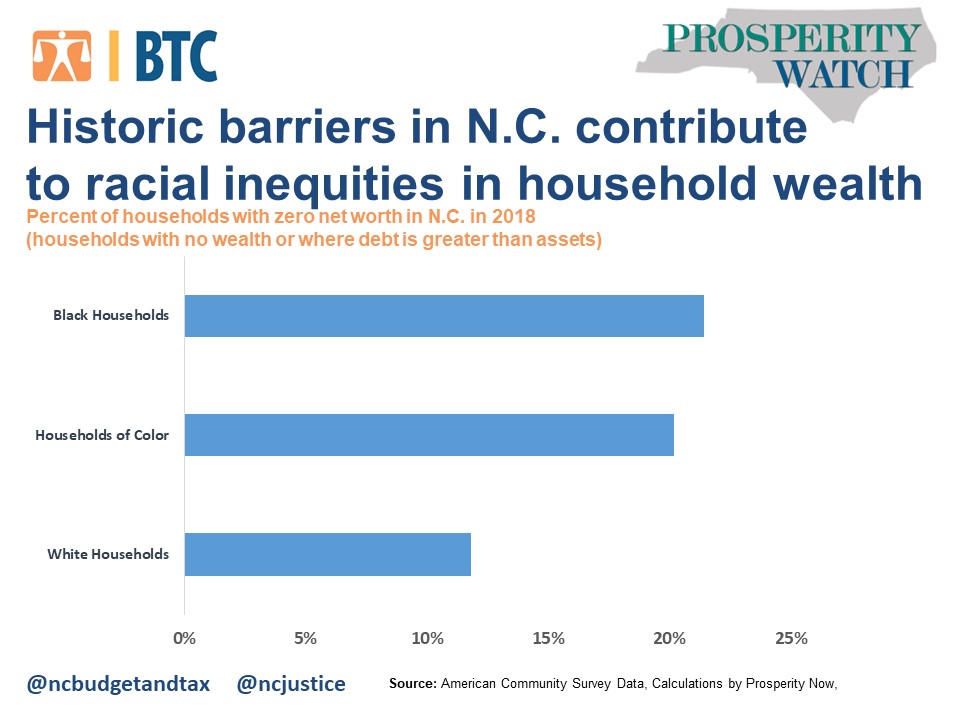 At the intersection of gender and race is an even greater disparity in wealth. Due to the historical legacy of the racial and gender wealth gap in the United States, women of color end up with the least amount of wealth: The median wealth of single Hispanic and Black women equals to less than a penny for every dollar of wealth owned by single non-Hispanic men— $200 and $100 respectively.[2]

Changes in policy are critical to closing the racial wealth divide. Otherwise, historically marginalized communities and families may never “catch up” to white wealth, and in turn, will never experience true prosperity.